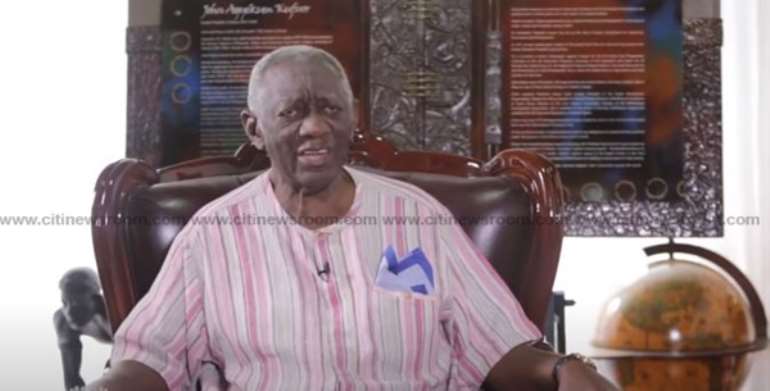 Ex-President, John Agyekum Kufuor has recounted his incarceration at the Ussher Fort Prison many years ago.

He describes as humiliating, the 15-month period he had to be imprisoned together with other members of the Busia-led government after they were overthrown in 1972.

Kufuor who was a young politician at age 34 and a deputy Minister for Foreign Affairs during the time he was arrested and detained for no reason moments after the coup d’etat.

Revisiting the sad story 48 years after on Foot Prints on Citi TV, the ex-president said the experience will go down in history as one of the shameful moments of his life.

“We were kept there and I stayed there for a year and three months. The Senior Ministers were there for 18 months. We all lived in there with no charges. It was such an experience so humiliating. I was there on 13th January 1972 but I didn’t come out until March 6, 1973. With all due respect, some of the big people [who are humans] had to [bath and attend to nature’s call] in the open. Can you imagine? Humiliating that was what it was”, he told host of Foot Prints, Samuel Attah-Mensah.

According to the former statesman, he is yet to come to terms with why a government with many intelligent and knowledgeable members will be made to bristle with indignity after their forceful removal from power.

“I wondered why all these well-meaning and brilliant people couldn’t hold power and we allowed ourselves to be kicked out by someone know body knew,” Kufuor remarked.

Commenting on lessons learnt, Mr. Kufuor maintained that despite the embarrassment, one of the key things he had had to learn while in prison custody has been the ability to be true to one’s principles and ideologies.

“From prison, well-wishers generally asked me why I am bothering myself with our politics, which is a dirty game so I should go back into practice or get myself some good position or even travel. But I had the opportunity in prison to think and think again – especially staying with all these brilliant people. So I said to myself, should you get the chance, stay the course because perhaps, your destiny will give you the chance to show how to do things,” he added.