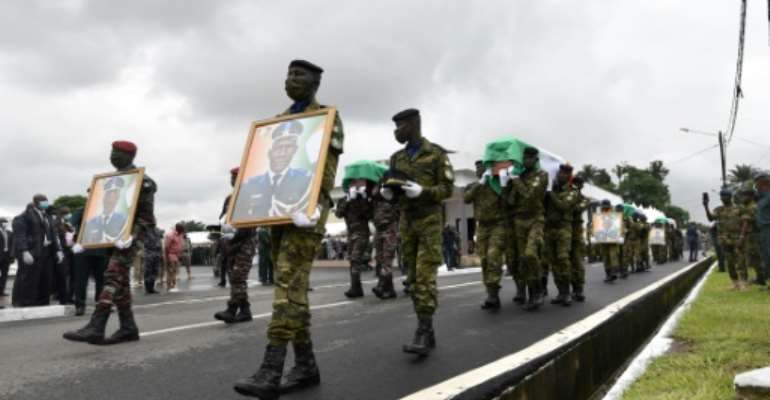 Ivory Coast on Thursday paid tribute to soldiers killed in a jihadist attack last month that has shaken the country, as the brazen assault's death toll rose to 14.

It was the first attack by Islamist extremists in the West African country in more than four years and has sparked fears that the jihadist violence plaguing its northern neighbours is moving southward.

Dozens of gunmen targeted a frontier post at Kafolo, on the border with Burkina Faso, in the June 11 pre-dawn attack.

The official death toll is 13, but the military told AFP that a 14th person had succumbed to his injuries.

Fourteen coffins were covered with Ivorian flags during a televised ceremony at a military camp in the capital Abidjan on Thursday.

The soldiers were posthumously made knights of the national order at the emotional ceremony attended by family members of the victims, President Alassane Ouattara and political and military figures.

"They made the supreme sacrifice to protect Ivory Coast from the barbarism of those who like vampires only aspire to drink blood," army chief of staff Aly Justin Dem said at the ceremony.

Salimata Doumbia, the widow of marshal Lansine Bamba who died in the attack, said her "husband sacrified himself for the fatherland".

"There is nothing we can do, it is God who willed it. We will try to overcome it."

About 30 people in total, including the jihadist commando leader, who was from Burkina Faso, were arrested following the attack, according to authorities.

The attack was attributed to the Group to Support Islam and Muslims (GSIM), an organisation linked to Al-Qaeda.

It was thought to be retribution for a joint operation launched by Ivory Coast and Burkina Faso last month aimed at flushing out jihadists near their shared border.

It was the country's first attack by Islamist extremists since March 2016, when a raid on hotel terraces in the southeastern beach resort of Grand-Bassam left 19 people dead.

The country fears that a jihadist revolt which began in Mali in 2012 will cross into Ivory Coast, which has only recently returned to stability after a decade-long period of turbulence.

You can’t dictate to Akufo-Addo; stop the disrespect – Sefwi...
25 minutes ago