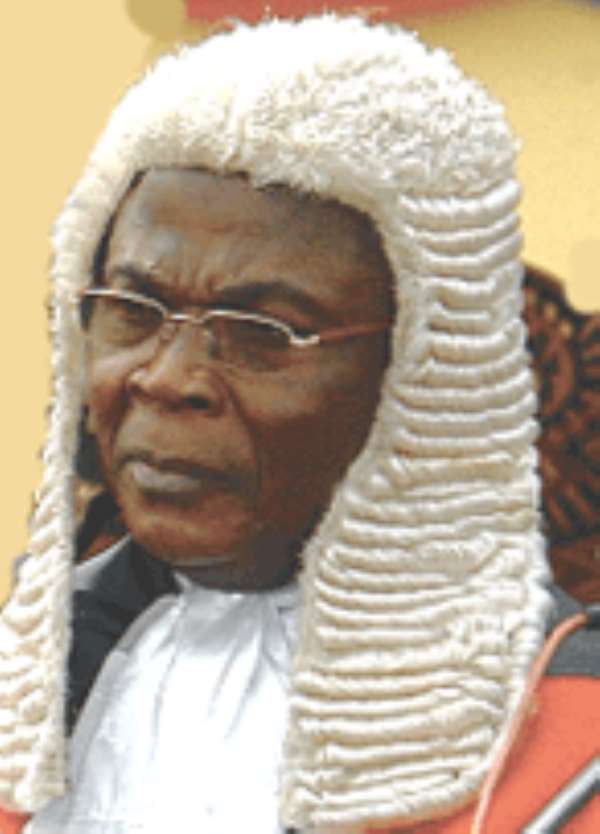 The Supreme Court yesterday described as unconstitutional the decision by the President to set up a committee of enquiry to investigate allegations of impropriety levelled against the Chief Justice.

This is because the decision was not in conformity with the tenets of the Constitution.

Consequently, it declared as null and void the five-member committee set up by the President in April this year to investigate allegations made by Mr Bright Akwetey, an Accra legal practitioner, of judicial misconduct and abuse of power by Mr George Kingsley Acquah in relation to three judges whom he claimed had not been fairly treated by the CJ.

Mr Akwetey accused the CJ of treating the three judges unfairly. In its unanimous decision, which lasted for more than three hours, the court held that upon the true and proper interpretation of Article 146 of the Constitution, a prima facie case was required to be established against the CJ prior to the setting up of a committee to investigate him.

According to the court, the President's consultation with the Council of State included the determination of a prima facie case against the CJ, which was not done before the committee to investigate him was set up.

Following Mr Akwetey's petition to the President, an employee of the Statesman Communications Limited, Mr Frank Agyei Twum, challenged the setting up of the committee to investigate the CJ.

Also affected by the suit was the Attorney-General, who did not turn up to contest the issue.

Mr Akwetey alleged that the CJ had victimised the three judges, who worked within the confines of the law, in apparent defiance of the CJ's interference in their work.

The plaintiff, in challenging Mr Akwetey's petition and the committee set up by the President, invoked the original jurisdiction of the Supreme Court for a declaration, inter alia, that the appointment of a committee to inquire into the petition “constitutes an interference with the judiciary in the exercise of its judicial functions” and also that “Article 146 requires that a prima facie case be established on the petition before the setting up of the committee of inquiry”.

It was the view of the court that there were gaps in the logical segments of Article 146, especially Sub-section Six which raised a wider issue of the independence of the judiciary.

According to the court, the Constitution was not explicit on the procedure for impeaching the CJ and that Article 146 only stretched the basic procedure for the impeachment of the CJ, without bringing out the essential details.

It held that the Constitution envisaged an ad hoc committee whose procedure in the performance of its duties was also left out, adding that the nature of the CJ's offence which would warrant his impeachment was not laid out and the Constitution, as it stood now, sought to bring out too many personal opinions into the matter.

The court stated that the CJ should have the benefit of a prima facie case against him before a judicial committee was set up to investigate him but that was inadvertently or intentionally omitted by the framers of the Constitution.

Any insistence on that, the court said, would amount to rewriting Article 146 of the Constitution, which was not part of its duty of interpreting the law, and since no such express wording was used in the case of the CJ, it would be improper for the President, in consultation with the Council of State, to set up a committee of enquiry.

In reference to the alleged victimisation of the three judges, as contained in the petition, the court held that their transfer outside Accra was within the purview of the CJ's administrative duties as the Chairman of the Judicial Council.

It said there was an indisputable fact that transfers and a dismissal occurred and that the action did not amount to a miscarriage of justice because the essence of the administrative function of the CJ was to enjoy autonomy from the Executive.

The court described as dangerous a precedent to uphold that what the CJ did in the discharge of his administrative functions amounted to an undermining of justice.

It would be an error to rule out all acts of the CJ because if it was established that the CJ was taking bribe in the transfer of judges, then a case had been established against him, it held.

That notwithstanding, the court said the administrative acts of CJs were not immune from the challenge of impeachment.

The question of what happened after a CJ had been removed from office also came up because it was not settled as to whether once a CJ was removed he could still be on the bench as a Justice of the Supreme court and that called for greater caution in dealing with issues which bordered on their impeachment.

As to whether the petitioner had capacity to do what he did, it was the opinion of the court that there was no justification for any requirement and that it should be careful not to put impediments in the way of people who wanted to keep judges accountable.

It said any qualified Ghanaian could petition the President for the removal of a CJ but said that was upon the establishment of a prima facie case before the President could set up a committee, adding that a person needed not to have interest in a case before bringing it against a CJ.

The court further described the publication of the petition to the President in the media as unconstitutional because a petitioner, under Article 146, needed not disclose the contents of a petition to the President, saying although the petitioner had the right to freedom of communication, it was unsafe to impugn the integrity of judges in public, especially when the allegations could turn out to be false.

Meanwhile, the court, in giving its reasons for overruling a preliminary objection raised by Mr Akwetey on the constitution of the panel by the Chief Justice in the substantive matter, said although it was an obligation and a right to the CJ to empanel justices of the Supreme Court, the justices so empanelled were not malleable to the policy of the CJ but independent.

It said the CJ acted as an administrator when he empanelled the court and that could not be interpreted as being a judge in his own course.