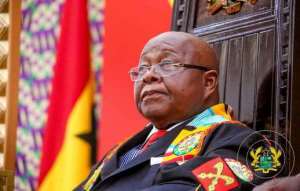 Speaker of Parliament, Prof. Aaron Mike Oquaye is urging legislators who were unsuccessful in the New Patriotic Party’s primaries, not to abandon their duties in Parliament despite their defeat.

According to him, the nature of the enterprise of politics involves outcomes such as electoral defeat and must be accepted as such.

Addressing the House on last weekends NPP’s primaries, Oquaye said, “being out of Parliament does not mean you are not going to serve. We all know that you can leave Parliament and serve in government and some even do that more strongly outside Parliament. If affects both the left and the right and we know of precedents in this regard. I will say let us attend to the business of the House in all seriousness and in all practice so that if fortunes smile on your party, some of us can still continue to play an impact role and if fortunate also smiles on the people on the right you will also be able to play a meaningful role in building this nation, Ghana,” he said.

He further wished them better luck next time.

“Congratulations to those who won and those who did not, better luck next time. We are in a very competitive situation and in fact, one thing we should all realise is that sometimes you lose and sometimes you win. Once you win a fight, be prepared to lose one someday. That’s the name of the game and in fact, if nobody lost, nobody would have been here. And even for our followers, let us learn to rather cool them down.”

Prof. Oquaye also urged the Members of Parliament on both sides of the House to comport themselves in the election season

“I want us to have the full complement of the House until the election time. I also continue to pray that as much as we are all in the political season we must act as statesmen and assume some circumspection in all we do and in all that we say is good to us. In politics you know, there is a political class and when you talk about that group of people, it is to attack both the Majority and Minority members of Parliament at any given time because those are the people who are in politics and the game of politics and I hope we conduct activities in that manner for the rest of the period,” he further added.

The NPP on June 20, 2020, held its parliamentary primaries in constituencies it has sitting Members of Parliament.

About 40 incumbent MPs were defeated.

President Akufo-Addo’s sterling leadership saved us from COV...
7 hours ago