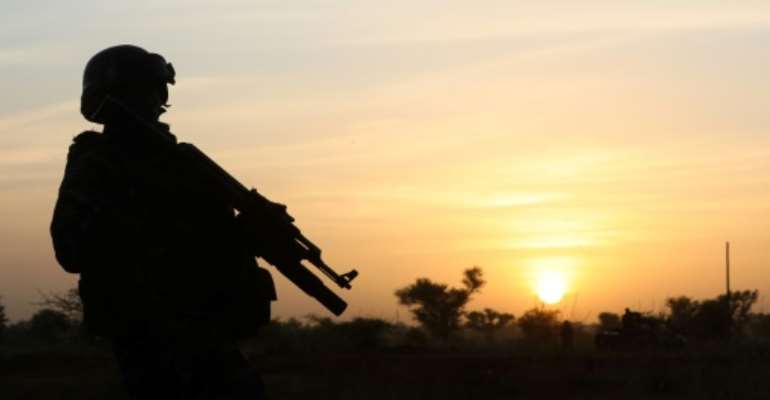 Experts fear that the jihadist revolt in the Sahel could spread to coastal states on the Gulf of Guinea. By Ludovic MARIN (POOL/AFP)

Ivory Coast said Monday it had captured a jihadist who led a deadly attack on a frontier post this month and arrested a "very large" number of his subordinates.

"The commander of the team who led the action was taken yesterday," Defence Minister Hamed Bakayoko said at a military camp in Abidjan, during a speech honouring soldiers killed during the border raid.

He did not identify the individual or give any details about the capture.

"We will go further as the investigation progresses. We will know who he was in contact with, who is behind it," he said.

Bakayoko also said the authorities had carried out a "very large (number) of arrests of people directly involved" in the attack.

The military say "around 10" army personnel died and six were wounded on June 11 when dozens of jihadists mounted a pre-dawn attack at Kafolo, on the northeastern border with Burkina Faso.

Other sources put the death toll at 12, comprising 11 soldiers and a gendarme, and describe the raid as a reprisal for an anti-jihadist crackdown.

It was the first assault by Islamist extremists on Ivorian soil since March 2016, when a raid on hotel terraces in the southeastern beach resort of Grand-Bassam left 19 people dead.

The latest attack was carried out by the Group to Support Islam and Muslims (GSIM), an organisation linked to Al-Qaeda, according to a source in Burkina Faso.

Bakayoko said the arrests of people who took part in the assault came thanks to photos retrieved from mobile phones.

On June 18, the Ivorian army said it had carried out a sweep in the Kafolo area and in the neighbouring Camoe National Park, a reputed haven for jihadists.

Security analysts have long worried that a jihadist revolt in the Sahel that began in Mali in 2012 is spreading towards coastal states on the Gulf of Guinea.

Jihadist violence, often intertwined with inter-communal violence, resulted in 4,000 deaths in Mali, Niger and Burkina Faso in 2019, according to the UN.

The attack on Kafolo shook Ivory Coast, which has only recently returned to stability after a decade-long period of turbulence and faces presidential elections on October 31.

A major exporter of cocoa and coffee, it has also returned to its position as the biggest economy in West Africa.

President Alassane Ouattara will take part in a funeral tribute to the soldiers, Bakayoko said. The date of the ceremony has yet to be set.

The June 11 attack took place in the same zone where the two countries last month launched a ground-breaking joint operation to flush out jihadists.

"Operation Comoe," named after a river that flows through the two countries, led to the death of eight suspected jihadists, the capture of 38 others and the destruction of a "terrorist base" at Alidougou in Burkina Faso, the Ivory Coast army said on May 24.

Fuel price increases: Akufo-Addo, Bawumia callous about the ...
27 minutes ago

Cape Coast Airport will be constructed at all cost - Akufo-A...
27 minutes ago