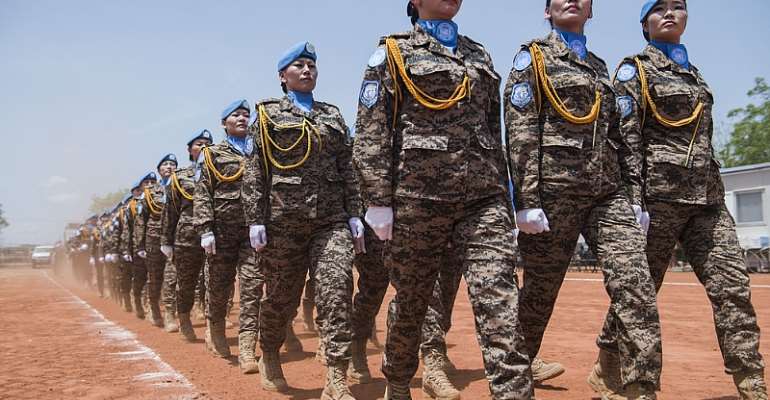 Can you tell us a bit about yourself?
I am Major Roseline Stephen Agwai from the Nigerian Army. I am a Conduct and Discipline Officer with the United Nations Organization Stabilization Mission in the Democratic Republic of the Congo (MONUSCO).
Currently, I am the Military Staff Officer attached to the Field Conduct and Discipline Team in Kalemie in eastern DRC.
I joined the mission on 22 September 2019 and was first deployed with the Field Conduct and Discipline Team in Beni and then moved to Kalemie.
What are your responsibilities in the mission and what is your typical day like?
I organize regular briefings on discipline and conduct in general for all MONUSCO staff that report to duty in my field office.
I liaise with all military contingents including military observers and military staff officers on conduct and discipline trainings especially, sexual exploitation and abuse.
I am also responsible for enforcing all the rules against misconduct together with other mission stakeholders by ensuring that appropriate action is taken against any kind of alleged misconduct reported to my office.
How long have you been a UN peacekeeper and how did you become one?
I have been a UN peacekeeper since 2010. My first mission was the UN Mission in Darfur (UNAMID) from 2010 to 2011. I was the Military Police Officer of the Nigerian Battalion (NIBATT) 22 contingent.
The second mission was the UN Mission in Liberia (UMMIL) from 2015 to 2016, I was the Military Police Officer, Legal Officer, Gender Officer and National Investigation Officer of NIBATT 37 contingent.
I became a peacekeeper because of my legal profession as well as being a military officer.
What did your family and friends back home think about your decision to leave your country and work for a UN peacekeeping mission?
My family and friends have little to say about my deployment in the mission because they are aware it is a 'call of duty' for me being a military officer.
What are three things you like most about the mission and the country?
In the mission, I like the administrative system of the UN, and the working tolerance among MONUSCO staff. I like the way information is disseminated within the mission.
In the country, I like the people, they are friendly. I also like the climate.
What part of your job do you find most challenging and why?
Engaging with the local civil society community can be challenging due to the language barrier that makes communicating difficult.
Do you think female peacekeepers serve as role models for the local population?
Of course, more especially to women and girls. The female peacekeepers inspire them. They even feel relaxed communicating, sharing their experience and problems with female peacekeepers. Likewise, the men are more comfortable with female peacekeepers when it comes to interactions with their families.
What would you say to female soldiers considering a career in peacekeeping?
A career in peacekeeping is fulfilling. You learn tolerance and how to have good working interactions with people from all over the world. You give your best in trying to create a peaceful environment for local people through teamwork.