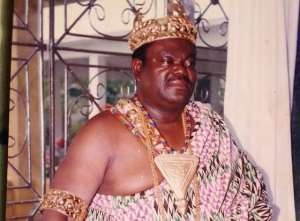 Stool Elders of Nungua in the Greater Accra Region are in a collision course with the National House of Chiefs for removing the name of Nii Odai Ayiku IV from the register as Nungua chief, allegedly without preferring any charges against him.

They are insisting that “the National House of Chiefs erred by expunging the name of Nii Odai Ayiku IV from the register because they did so without any charges preferred against the Nungua chief either by themselves or the Nungua kingmakers.”

They have, therefore, asked the House to re-insert the name of the Nungua chief in the register as soon as possible.

According to them, the expunction of Nii Odai Ayiku's name from the register was revealed through a search conducted at the registry by Bright Akwetey Esq. and Andy Appiah Kubi Esq., lawyers for the Nungua Mantse.

The statement said that during the era of the Convention People's Party (CPP) government, attempts were made to destool Nii Odai Ayiku IV and the then Judicial Commissioner, S. K. Banson Esq., pursuant to subsection 5 of section 39 of the Chieftaincy Act 1961 (Act 81), made a finding that “none of the charges preferred against the Nungua Mantse, Nii Odai Ayiku IV, for his destoolment has been proved or confirmed.”

In 1967, it posited, such attempts to destool Nii Odai Ayiku were repeated and the government of the National Liberation Council (NLC) on February 28, 1968 appointed a committee consisting of J. B. Siriboe Esq. as chairman, Togbe Tepre Hodo and I. K. Agyeman (MBE) Esq. to investigate the purported destoolment of Nii Odai Ayiku IV.

The committee's findings were to the effect that “no case has been made out against the Nungua Mantse to warrant his destoolment.” It recommended the dismissal of all the charges against Nii.

On July 25, 1967, the Ga Traditional Authority confirmed that the Nungua Mantse had not been destooled.

In spite of all such decisions, “the usurpers of the Nungua Stool used their political connections during the regime of the Provisional National Defence Council (PNDC) to disturb the Nungua Mantse and their actions culminated in the publication of E.I. 18, which was premised on the position that Nii Odai Ayiku IV had been prohibited from performing his traditional duties as the Nungua Mantse.”

The statement said “it is instructive to note that at no material time has any Judicial Committee or any other statutorily recognized Chieftaincy Tribunal made any order destooling Nii Odai Ayiku IV.”

They said records at the National House of Chiefs show that Nii Odai Ayiku IV was legitimately enstooled as Nungua Mantse, but another chief, Nii Odehe Kpakpa Odaifio Wulentse has been 'masquerading' as the Nungua Mantse.

Tribal Conflict Looms At Osudoku Over Land Litigation
8 hours ago

Election 2020: We’ll Deal With Trouble Plotters To Know That...
8 hours ago