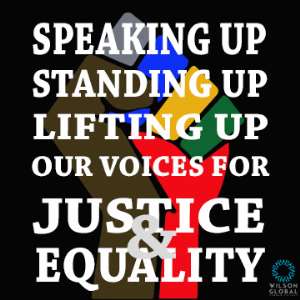 Wilson Global Communications extends sincere condolences to the family and friends of Mr. George Floyd – and to all of the other African Americans who have lost loved ones to police brutality, and injustices of all forms, including the COVID-19 pandemic. There are so many names to add to the incomplete list above, that after a while, the names begin to blur.

They are sons and daughters, mothers and fathers, uncles, and favorite aunties. They are professionals, some climbing the corporate ladder, students, blue-collar and essential front-line workers. But regardless of their status in our society, they are all human beings. Being human hasn’t seemed to matter to some police officers.

African Americans have been killed as innocent bystanders, jogging in nearby neighborhoods, in bed in their own homes, bird-watching in the park, while mentally ill, under arrest or targeted for arrest, and each of those inhumanly mistreated was targeted because of the color of his or her skin.

For many years, Wilson Global Communications has worked to bring people together across racial and ethnic lines. Following the 1992 Rodney King civil unrest in Los Angeles, we created Good News Magazine to help heal the wounds of racial injustice and social unrest. We took our TV crew to South Africa to provide America with coverage of the historic election of President Nelson Mandela, ending apartheid leadership, in South Africa in 1994. And for the past 10 years, in collaboration with our Hong Kong-based client, we have enabled students from Historically Black Colleges & Universities to expand their world views and multi-cultural global perspectives by studying tuition-free in major Chinese universities.

We connect people across cultures with the goal of increasing multicultural understanding, appreciation, and collaboration among people of all races and faith. At this critical tipping point in our nation’s history, it is “past time” for us to join forces in recognition of our shared humanity. It is time to acknowledge that racial inequity still is a poisonous virus on America’s soul that must be excised and healed, once and for all if our democracy is to survive and allow all Americans to prosper and live in peace. It also is time to take the critical activities required to ensure that going forward, equality for opportunity and treatment under the law, become not just ideals, but a reality for all Americans, regardless of race, gender or religion.

As the COVID-19 global pandemic has unveiled inequalities in access to quality healthcare, employment, and economic opportunities that provide a pathway and foundation for wealth-building, killings of African Americans at the hands of police have again opened the unhealed wounds of racism in America. Patience has been exacerbated. Hope has been quelled. Anger has surfaced.

As peaceful protests continue here in the U.S. and around the world, Wilson Global joins our voice with those calling for change. We say “no” to racism in any and all forms. We say “yes” to people of all races speaking out and doing what’s needed in this country. Fairness. Equality. A piece of the American pie. We know that things MUST change. And we all MUST change things — together.

We are encouraged to see the groundswell of multicultural protesters joining African Americans to share and peacefully express their anger. We encourage them to continue walking with us, talking with us, and fighting injustices with us. Our hope is that more white Americans will join the fight for equality and justice. That they will – Speak Up, Stand Up, and Lift Up their voices in workplaces, neighborhoods, religious institutions, universities – everywhere they know and see racial prejudice occurring. We encourage cross-cultural communication.

We encourage holding Start-Up discussion groups in your local communities and inviting leaders in race relations to educate constituents on best practices for making needed changes in mindsets and behavior towards African Americans, and to learn how to support laws and government legislation that harbor or ignore racial injustices. Silence and non-action is complicity.

All of us want to be treated as human beings. Let’s stand together and be there for each other to produce a win-win environment for all of us to thrive.