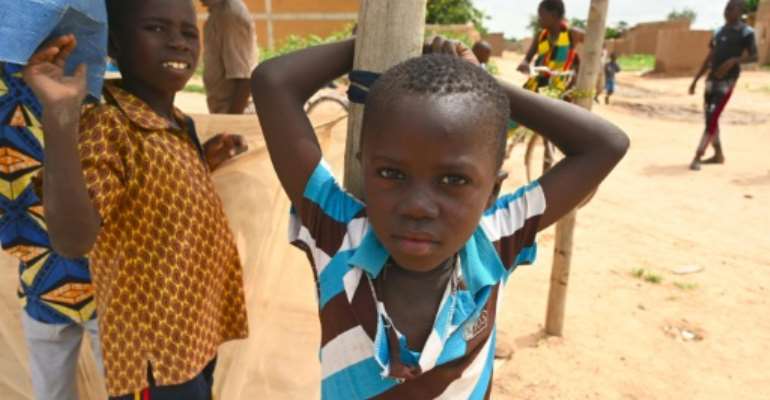 A few of the 860,000 people displaced internally in Burkina Faso due to jihadist attacks. By ISSOUF SANOGO (AFP/File)

More than a tenth of the population in Burkina Faso, a drought-stricken West African country plagued by jihadist violence, is at risk of hunger, according to government figures issued on Thursday.

A report by the country's council of ministers found that 2,151,970 people will suffer from "severe food insecurity" across the nation this month and next -- roughly half a million more than last year.

In addition, "137,175 people in the Sahel, Centre-Nord, Est and Boucle du Mouhoun regions could encounter a food emergency," the report said, singling out arid areas that have also been badly hit by jihadist attacks.

They also called for "urgent responses" to support the agricultural and livestock industries, for malnourished children under five to receive assistance and for the supply of drinking water to be bolstered.

But that remains well above the World Health Organization's critical thresholds, the government said.

Since 2015, Burkina Faso has battled a jihadist insurgency which has killed nearly 1,000 people and caused around 860,000 to flee their homes.

Inter-community and ethnic violence has led to more bloodshed and, along with the increasing jihadist attacks, have stretched already slim resources in the country's Sahel north.

The population of the landlocked country was 18.6 million in 2016, according to UN figures, while the World Bank gives an estimate of 19.75 million in 2018.