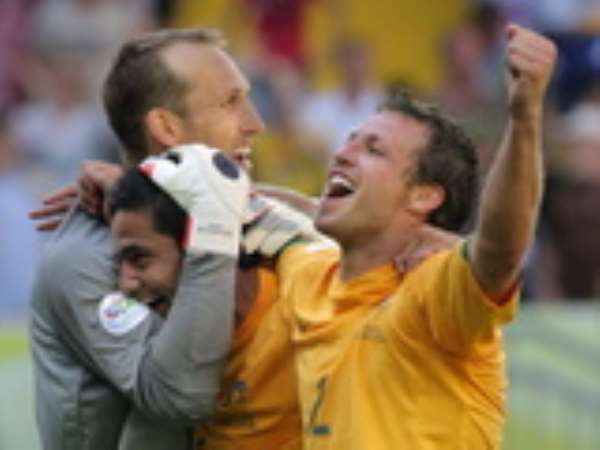 Substitute Tim Cahill was the hero for Australia as the Socceroos scored three times in eight minutes to beat Japan 3-1 in Kaiserslautern and record both their first goals and their first ever win in FIFA World Cup™ finals history on Monday, 12 June 2006.
Trailing at half-time to Shunsuke Nakamura's 26th-minute goal, the opening Group F match turned on its head with the arrival of Cahill. He equalised with a close-range strike in the 84th minute and then fired a spectacular second in the 89th before striker John Aloisi put the icing on the cake two minutes into added time.

The match
6': Under a blazing sun, it was Australia captain Mark Viduka who had the first attempt on goal. Latching onto a lobbed pass, the striker shot first with his left foot and then followed up with his right but both efforts were parried by Yoshikatsu Kawaguchi.

14': As expected, Japan looked to build play more slowly with Guus Hiddink's side playing a more direct, energetic pressing game. After Takashi Fukunishi had hit a 30-yarder well over, the Socceroos proceeded to launch a barrage of crosses into the area testing Japan's defence to the full. From one, Marco Bresciano blasted over.

22': Japan were taking their time to settle but midway through the first half they almost took the lead. Turning past his marker on the edge of the box, Naohiro Takahara did not strike the ball as cleanly as he would have wished, however, and watched the effort trickle wide.

25': It was end-to-end stuff and Viduka produced a delightful back-heel into the path of Bresciano but the Brescia midfielder's side-footed finish from just inside the box lacked sufficient power and Kawaguchi got down well to save.

26': A minute later and Japan were in front with the softest of goals. Finding himself on the right wing, Nakamura chipped in a cross with his left foot that sailed over the advancing Mark Schwarzer and rolled into the empty net to the screams of the thousands of blue-clad fans in the arena. (0-1)

27': Almost from the restart, Harry Kewell, who had previously been kept fairly quiet, beat his man, tore goalwards and fired inches over with his left foot.
41': Australia were finding the going tough as the half wore on. Bresciano, who was finding more space than most, bent a low 30-yard free-kick into the side-netting.

Shutting up shop:
53' Hiddink sent on his leading scorer in qualifying as Cahill, who had been an injury doubt prior to the finals, took the field in the place of Bresciano.

55': Despite the Socceroos' efforts, Japan's defence continued to look safe as the Australians searched for an equaliser in the early stages of the second half. Conserving their energy better in the unrelenting heat, the Samurais were looking dangerous on the break with Nakamura and Hidetoshi Nakata finding plenty of space to weave their magic.

69': Kawaguchi, who had been well protected, pulled off a terrific save to keep his side ahead. After substitute Joshua Kennedy had been brought down on the edge of the box, Viduka threw his whole weight behind the resulting free-kick but the Japanese goalkeeper dived to his right to turn away the powerful effort.

76': With the game opening up, Takahara won possession just inside the Australian half and bore down on goal. The Hamburg striker delayed his pass to the unmarked Atushi Yanagisawa, however, and the final shot fell tamely into the hands of Schwarzer.

78': Two minutes later and Yuichi Komano found himself in acres of space on the right but again his cross failed to pick out any one of the three players in the box.

84': Substitute Aloisi forced another fine save out of Kawaguchi with a scorching 30-yard free-kick.

85': From the resulting corner, the goalkeeper was left punching thin air as he ventured outside his six-yard box and in the ensuing scramble Cahill bundled in the equaliser. (1-1)
87': With huge gaps opening up all over the park, Fukunishi fired just wide from 20 yards.

89': Cahill, from a similar position at the other end, made no mistake, crashing his 20-yarder off one post and into the opposite corner of the net to give Australia the lead with his second goal. (2-1)

90 +2':In the dying seconds, another substitute Aloisi left victory in no doubt, driving through the heart of Japan's defence and, with his favoured left foot, firing in the third. (3-1)

In conclusion: Australia showed all their fighting qualities to come back in a game in which they looked dead and buried with substitutes Cahill and Aloisi the heroes. Japan, who controlled the match for long periods, will be disappointed not to have added a second after squandering a number of presentable opportunities.