Dr. Bawumia Must Bring His Boys To Order On Ghana's Debt Stock 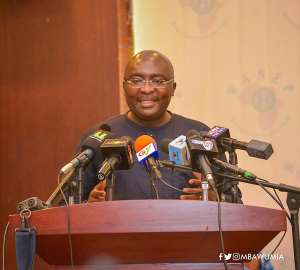 "Let's forget about the oil money. Let's forget about gold. Just put those resources they've had aside. I just want to focus on statistics. How much money have they borrowed since they've been in office in the last seven years? When they came in, Ghana's debt was 9.5 billion Ghana cedis. Today, after seven years, they've increased it from 9.5 billion, which is from independence to 2008. Today, they've increased it to 90 billion cedis." ~ Dr. Bawumia on Ghana's May 2015 debt stock

I have taken a keen notice in recent times of a calculated attempt by the NPP communicators and footsoldiers on social media to mislead the ordinary innocent Ghanaian on the country's debt stock issues. What these funny footsoldiers seek to do is to compare in percentages wise, the debt stock in the 8 years administration of the NDC to the 3 years of this insensitive Nana Addo government.

To start with, please let's consider this scenario;

From the table above, it is clear that this NPP government has done Ghanaians more harm than good, so far as Ghana’s current debt stock is concerned.

Now to the main subject matter [I'm not interested in what the monies were used for by the various governments for now], please take note of these facts:

• It increased to GHS120 billion at the end of December 2016 (An increase of GHS110.5 billion in 8 years of the NDC administration)

• The debt stock at the end of MARCH 2020 which was released by the Bank of Ghana stands at GHS236 billion (an increase of GHS116 billion in 3 years and 3 months of this NPP administration).

• On the average, the NDC increased the debt stock by GHS13.81 billion yearly in the 8 years of its administration WHILES the NPP has so far increased it by GHS35.15 billion yearly in the last three years and 3 months; thus even if the stock remains at GHS236 billion till the end of December 2020. And we all know that it will definitely increase because the government continues to secure more loans since April 2020 in the name of COVID-19 fight and stimulus packages for businesses.

,000,000*100=96.6%, without considering and talking about the real amounts involved within the time periods in question.

So shamefully for them, they are making noise on social media over the 1163% in 8 years of the NDC instead of the all-time record of GH116 billion figure in less than 4 years of this their reckless administration.

Please let's all be vigilant; percentages can be misleading sometimes if one is not smart.

I, therefore, call on Dr. Bawumia to urge those his NPP boys on social media to stop their mediocre propaganda on the debt stock subject and provide solutions if any to the Economic Management Team so as to curb the horrible and terrible rise in the country's debt stock under his watch.