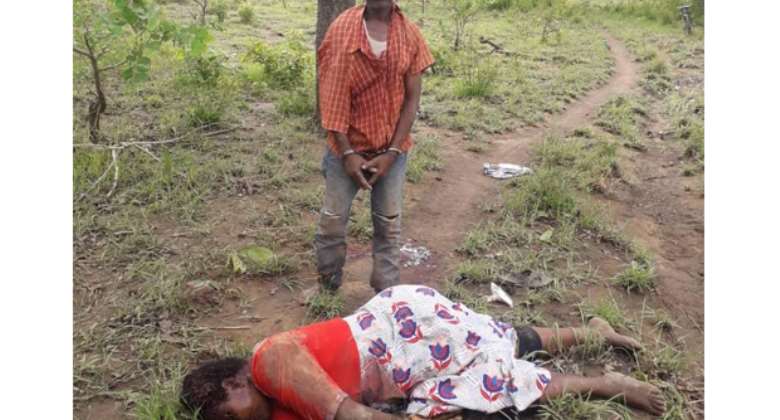 The Sawla Tuna Kalba Police Command have picked up a 60-year-old man who allegedly killed his wife, Bora Bonbiatey, 57, at Gando near Nyanyema, a suburb of Tuna in the Savannah Region.

The suspect, Yikatey Somatey, had accused his wife of cheating with another man in the community.

DGN Online gathered that the suspect lured his wife to a bush to perform some family rituals and in the process poured pepper into her eyes.

He then used a sharp cutlass to inflect multiple wounds on her until she died.

He then disposed off the body at a nearby bush and absconded.

However, luck eluded him when he was arrested by the police.

The Sawla District Police Commander, ASP Degraft Armah Adjei, who confirmed the incident to journalists said the uncle of the deceased reported to the police station accusing the suspect of killing his niece.

According to him, the police moved to the scene and found the deceased in a pool of blood with multiple cuts on her head and right eye.

He said the suspect will be arraigned before court after investigations.

Meanwhile, the body of the deceased has been handed to the family for burial.

ASP Adjei cautioned residents against taking the law into their own hands but rather rely on the police for justice.