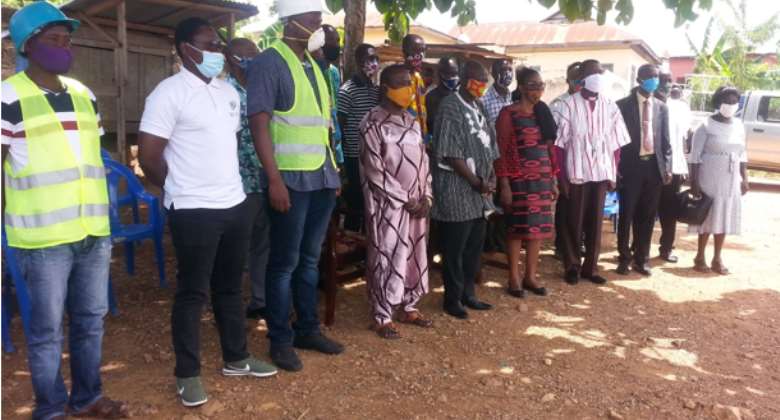 According to her the project when completed would have office accommodation, laboratory, toilet facilities, and among others.

At a durbar before the groundbreaking ceremony, Mrs. Adu thanked the participants for making time out of their busy schedule to attend such an important programme. She indicated that the government under the leadership of His Excellency Nana Addo Dankwa Akufo-Addo wants every Ghanaian child of school-going age to have access to ICT education.

Mrs. Adu said it was against this background that the Ministry of Communication has initiated the process to construct an ultra-modern Information Communication Technology (ICT) Centre to serve students in these catchment areas. She said the project when completed it would help the students to gain more computer knowledge and skills to enable them electronically address challenges confronting them.

On the quality of work, Mrs. Adu said when quality work is done by the contractor, it would go a long way to have a positive impact on the citizens and the country at large and however charged the contractor to do quality work and ensure the project is completed on time to serve its intended purposes.

Dr. Cardel Mohammed Mahama, the contractor of Fresh Cut Consult Construction Company, an Accra based construction firm executing the ICT project promised to complete the project in the next six (6) months to make it serves its purposes.

In a related development Mrs. Ursula Owusu-Ekuful, the Minister for Communication through Papa Yaw Amoah Nyarko, the Assembly Member for Asenee electoral area presented some items such as sugar, rice, oil, veronica buckets, hand sanitizers, packets of tissues, boxes of nose masks, cartons of milk, dustbins, GH¢ 5,000.00 and among others to the Birim Central Municipal Assembly for onwards distribution to the aged in the Municipality.

The items were donated as part of the Minister’s self-help project of ensuring the availability of food at the doorsteps of the aged during this COVID -19 season.

The MCE who received the items thanked the Minister and said the items would go a long way to alleviate the plight of the aged in the Municipality.

The Municipal Education Director, Mr. Benjamin Cudjoe on his part stated that there has been rampant stealing in the various schools in the Municipality and appealed to residents who indulge in such practices to avoid the menace and rather collaborate with the schools’ authorities to address the concerns of the students and parent-teacher relations.

Mr. Cudjoe said ‘’we leave in a society where children imitate the activities of an elderly’’ and urged all residents in the electoral areas to cultivate an attitude of good behavior to ensure it persuades the younger generation to embark on legally mandated behaviour in the society.

Brempong Gyamfi Saforo Kyere II, the Krontihene of Akyem Kotoku Traditional Area who chaired the event thanked the Assembly and Minister for Communication for initiating such an important project in the aforementioned School. He called on the government to do all he could to fence the school.