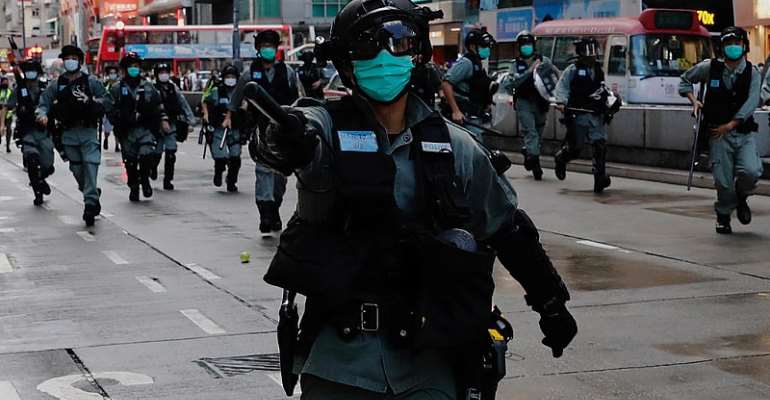 Hong Kong's protests kicked off again last weekend, and authorities used a new weapon in their arsenal to suppress them – social distancing directives in force since the coronavirus outbreak in January.

While demonstrations have continued throughout the Covid-19 pandemic in the semi-autonomous Chinese city, which never went into lockdown, they have been much smaller and less frequent than the ones that rocked the enclave for more than six months last year.

A march with the theme “resumption” had been planned for Sunday, but was cancelled by the organisers when it was refused a permit by police. Though Hong Kong has gone three weeks without a locally transmitted coronavirus case, restrictions remain in place.

Groups of protesters turned up nonetheless at about ten locations across the city, including the march's original starting point in the shopping neighborhood of Tsim Sha Tsui.

As with many protests in recent week, the intention was to sing in a shopping mall but a heavy contingent of riot police moved in quickly and arrested those present on violations of the Prevention and Control of Disease (Prohibition on Group Gathering) Regulation, which currently prohibits gatherings of more than eight people.

One of those detained was a 13-year-old boy working on a secondary students' journalism scheme.

There were also arrests in another shopping mall in Mong Kok, where police fired pepper rounds as families ate Mother's Day dinners in nearby restaurants. Later in the night, police and protesters faced off on the streets of Mong Kok, with the gathering firmly repressed, as police even forced journalists to the ground.

In all, 230 people were arrested on Sunday, while 18 people were injured. There were previous arrests on Friday as protesters took to the streets in anger after pro-Beijing parties wrested control of the Legislative Council House Committee from the pro-democracy faction, an act the latter decried as a coup.

On Friday too, social distancing violations were cited in the arrests and fining of protesters.

This was in marked contrast to the offhand attitude taken towards the crowds of mostly Western expats who thronged the central bar district the same night, as bars reopened after being closed for a month.

While individual parties might well have constituted eight people or fewer, there was no social distancing being practised between the groups. Other than a few murmurs of disapproval on social media, there was no sanction forthcoming.

The next big test of the police's tolerance of large gatherings will be the annual 4 June vigil, which has been held every year since 1990 to commemorate the Tiananmen massacre – the only such event permitted on Chinese soil.

Under the current legislation, it would be easy for the authorities to say no to it going ahead, but Hong Kong's pro-democracy movement are unlikely to take that sitting down, if the city remains free of Covid-19.