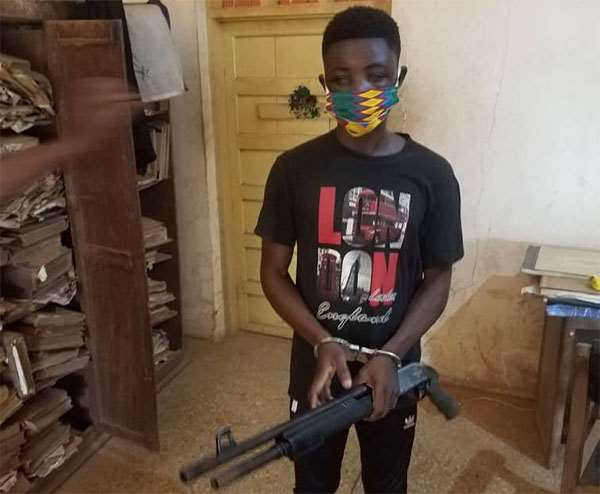 A 28-year-old man, Thomas Asamoah, who raided a gold mining site at Manso Abodom in the Ashanti Region with his gang, has been sentenced to 18 years imprisonment by a Circuit Court in Bekwai.

Asamoah, popularly known as Isco, was convicted of two counts of attempted robbery and possession of firearm and ammunition without lawful authority, contrary to Sections 18(1), 149, 11 (A) and 26 (1) (A) of the Criminal Offences Act 29/60 and Arms and Ammunition Act 1972 (NRCD9) after he had pleaded guilty to the offence.

He was jailed 15 years for attempted robbery and three years for possession of firearm without lawful authority by the court presided over by Joyce Boahen.

The prosecutor, Detective Inspector Stephen Ofori, informed the court that the incident occurred on May 4, 2020 around 4:00 pm during which the complainant, Stephen Awuni, a small-scale miner, and his workers were prospecting for gold.

According to him, convict Thomas Asamoah, in the company of one Kwaku Ernest and another person (both at large) stormed the mining site with pump action guns and fired two shots to threaten the complainant and his workers.

He narrated that Stephen Awuni and his workers quickly took cover in the bush upon sensing danger from the attackers.

The prosecutor said the gangsters rushed to the gold room of the complainant, but did not find any and fled empty-handed.

Inspector Ofori said later in the day, a witness in the case spotted Thomas Asamoah in a cocoa plantation, where he had gone to hide his pump action gun.

He raised the alarm and Asamoah was arrested. The complainant identified him as one of the three-man gang who attacked him and his workers at the mining site.

He admitted attempted robbery and possession of a firearm and ammunition with intent and after investigation, he was charged and arraigned.