I Want To Lead Nkrumaists 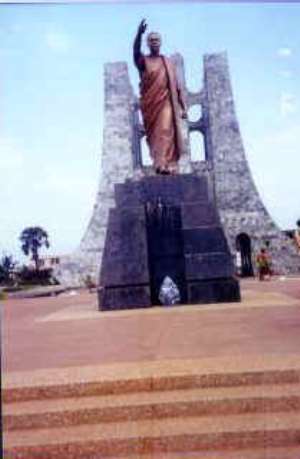 The Spokesman of the erstwhile Armed Forces Revolutionary Council (AFRC), Major Boakye-Gyan (Retd), has staked the claim to leading an Nkrumaist platform which he calls an amalgamation of progressive forces to win the 2008 general election.

He said with the current distressed state of the country, it was only an Nkrumaist entity, headed by a leader with vision, who could team up with like minded people to pursue an egalitarian agenda to address the needs of the nation.

In an interview with the Daily Graphic at his residence in Tema, Major Boakye-Gyan, who said politics was about doing something good for the society, pledged to lift the country out of its present bad state.

“I am burning with such a desire and ideas to ensure that the country, which is a failed state, is made to develop at a faster rate and eliminate poverty. It should not be allowed to turn into the condition in which it was in 1979. I don't want to be called upon again to help restore such a state in the manner which we did in 1979,” he said.

“What I intend doing is to be part of a political system, without using the barrel of the gun to fix the problem,” Major Boakye-Gyan added.

He made it clear that he, together with some others, had developed a model which would bring all the Nkrumahist parties and individuals together to vie for positions at both the constituency and national levels without necessarily uniting the parties under one umbrella.

He described the current leadership of the Convention People's Party (CPP) and those fragmented parties which had been locked up in unity talks for decades as unelectable and ageing and, therefore, incapable of winning an election.

He said the Nkrumahist tradition needed a virile and presentable core of people chosen by the people in the American style to ensure that it won the 2008 elections.

Major Boakye-Gyan said the Nkrumahist tradition did not need any unity or merger because, since 1966, after the overthrow of Dr Nkrumah, it had ruled the country for only two and a half years, while the rest of the years had been dissipated on unproductive unity talks which only benefited the enemies of the tradition.

Explaining the Nkrumahist Platform, which was different from unity and merger, he said all progressive forces, including Nkrumahists in both the National Democratic Congress (NDC) and the New Patriotic Party (NPP), would be made to sign up to a Progressive Charter for a common platform while all the parties maintained their identity.

He said all members of the different parties who expressed interest in vying for positions in the name of the Nkrumahist Platform would be given the opportunity to test their popularity at the constituency level using the voters register through an election conducted by the Electoral Commission (EC).

He said during the voting, the electorate would be urged to give money to the candidates as sponsorship packages and the same would be replicated nationwide for the presidential candidates.

He said after the election, the party or the individual who was popular in a constituency would become the parliamentary candidate, with the same going for the presidential candidates.

That, he believed, would cut short the unity talks which had stalled because of issues like motto, symbols, colours and a common presidential candidate and put the tradition on a pedestal ready to govern the country.

Major Boakye-Gyan said if the Great Consolidated Popular Party (GCPP), for example, got the presidential slot of the Nkrumahist fraternity, that would be the choice of the people and no member of the Nkrumahist tradition could abandon the charter and contest as another candidate or go solo as an independent candidate, as had been the case.

He said already his group was selling the idea to some leading members in the various Nkrumahist groups and described the response as favourable.

He, however, cautioned that the plan had September as the take off date and that any member of the party who dragged his feet would be left behind.

Major Boakye-Gyan said the idea had been subjected to test by some consultants and non-governmental organisations (NGOs) in the United Kingdom who had prescribed it as pragmatic and conducive for a country like Ghana.

Giving reasons for calling Ghana a failed state, he mentioned the rising spectre of poverty, the daily announcement of strikes by workers, the increasing number of accidents which had broken limbs and caused the loss of many lives, children without chairs and desks in the classrooms, the non expansion of infrastructure in the country's tertiary institutions and the lack of employment for the people as some of the graphic failures.

Major Boakye-Gyan was quick to add that the problem of a failed state should not be laid at the doorstep of any one particular government in the country but blamed on the unfavourable world economic order.

Prescribing a solution, he said the country would have to produce and process in large quantities what it really required and export the surplus for foreign exchange.