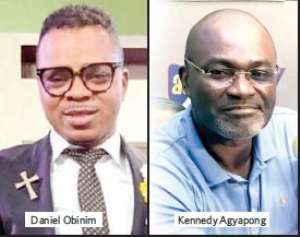 The two personalities, who have been throwing salvos at each other in the media lately, now want to test each other spiritually to establish who is stronger.

Bishop Obinim, the leader of the International God's Way Church, was the first to threaten to deal ruthlessly with Kennedy in the 'spiritual realm'.

According to him, Kennedy was getting on his nerves, for which reason he (Obinim) would spiritually silence him once and for all.

Speaking in a recorded video, Obinim said Kennedy had been spreading lies about him, but he had remained calm in the face of extreme provocation.

Obinim stated that he had realized Kennedy is assuming he is weak and cannot react to what he said were spurious allegations against him, adding that he is ever ready to face the MP.

“I have decided to break my silence and start dealing with Kennedy Agyapong in the spiritual realm; you will all see the outcome,” Obinim threatened.

Interestingly, Kennedy Agyapong, in response, instantly accepted the spiritual challenge, and said Obinim is powerless so he cannot harm him.

Kennedy, who has vowed to expose all fake pastors and spiritualists, then dared Obinim to do his worst, stating emphatically that he knows that Obinim is just making noise.

“Bishop Obinim has no power and I am not afraid of him. If he claims to have power then he should challenge me spiritually,” Kennedy fired.

According to the Assin Central MP, he decided to stop attacking Obinim, but he would break his promise and resume the attacks.

Kennedy said Obinim had bragged that he would deal with him spiritually and that was why he (Kennedy) had decided to resume the attacks on him.

Asked by the interviewer if he wanted to end his life in the hands of Obinim, Kennedy laughed and retorted “he can never kill me because he is powerless.”

Kennedy Agyapong claimed that he had in his possession a list of 27 ladies that Obinim, a married man and a pastor, was dating outside his marriage.

He said he was surprised that Florence Obinim, wife of Obinim “could insult me for having 19 children, whilst his pastor husband is womanizing.”

Kennedy stated that at the appropriate time, he would release the list of the 27 Obinim ladies.

He noted that it was never his intention to attack Bishop Obinim but his wife, Florence, tagged him as a womanizer and he wanted to prove that her husband is worse.

Kennedy and Obinim have been at each other's throat lately as they have made counter accusations against each other in the media.

The Assin Central MP has been at the forefront, firing verbal assaults at Obinim, whom he described as 'fake' and a 'fraudulent' pastor, who has been bonking many ladies.

According to Kennedy, Obinim had a field's day all those years duping people “and by the time I finish with him, his church will collapse.”

In a direct response, Bishop Obinim, who was quiet initially, just last week, threatened to ruthlessly deal with Kennedy in the spiritual realm for denting his image.