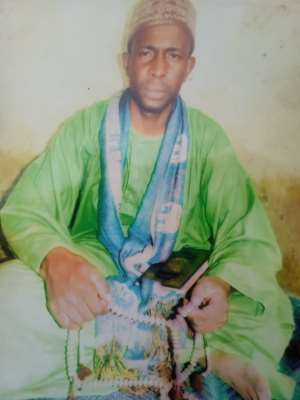 The Upper East Regional Police Command is urging the General Public to assist in tracing a 51-year-old suspect Mallam Ali for his alleged involvement in the gruesome murder of a 20-year-old Tricycle rider at the Sherigu, a suburb of Bolgatanga.

This follows a bench warrant issued for his arrest by the Bolgatanga District Court for offence of murder.

On April 21, 2020 reports went out that a final year student of Gowrie Senior High School in the Bongo District of the Upper East region was found dead in a bush near a refuse dumping site in Sherigu, a suburb of the Bolgatanga Municipality.

According to sources, the deceased from Pologo in the newly created Bolgatanga East District had both eyes plugged out and part of his head shaved, with his intestines hanging out with traces of multiple stabbings on his stomach and parts of his body, a suspicion that he was killed for ritual purposes.

In a press statement signed by the Regional Officer in charge of Public Relations, ASP David Fianko –Okyere, the suspect Mallam Ali, a native of Zebilla in the Bawku West District of the Upper East Region and a resident at Sawaba in the Bolgatanga Municipality is alleged to have attempted killing his own sister at Zebilla for rituals in 2015.

The statement disclosed that the suspect is always seen wearing Jalabia and was last seen in Sandema on Sunday, 19th April 2020.