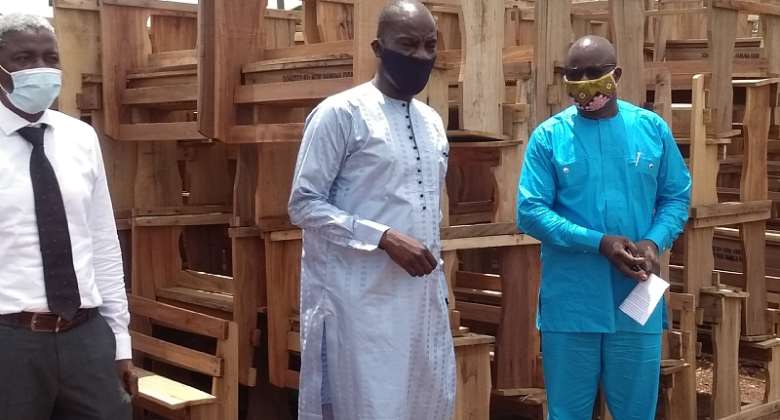 Tamale, May 06 – Mr Haruna Iddrisu, the Minority Leader in Parliament has called on President Nana Akufo-Addo to withdraw the Pre-Tertiary Education Bill from the legislature to allow for a more thorough and broader national consultation on it.

He said there were legitimate and major concerns raised by stakeholders concerning the bill hence the need to withdraw it from Parliament and subject it to consultations and discussions by educationists, chiefs, opinion leaders, amongst other interest groups to address the concerns.

Mr Iddrisu, who is also Member of Parliament (MP) for Tamale South Constituency in the Northern Region, made the call in Tamale on Tuesday when he presented 1000 dual desks to five basic schools in the Tamale Metropolis to support quality basic education in the area for improved literacy and numeracy skills.

Under section 32(4) of the Bill, inter-district transfer of a head teacher or staff of a basic school can only be undertaken by the Head of the Local Government Service whilst section 25(2) and 26(2) of the Bill stipulated that the President of the Republic shall be appointing Regional Directors and their Deputies and determining their terms and conditions of service.

Also, according to section 30(1c) of the Bill, the preparation, administration and control of budgetary allocations of the basic schools shall be determined by the District Assembly.

However, teacher unions in the country have kicked against some of the provisions of the Bill and have demanded further discussions on it.

Mr Iddrisu said “I am not primarily against decentralisation or decentralised roles in basic education but there are legitimate and major concerns raised by the stakeholders” adding “Are our Metropolitan, Municipal and District Assemblies ready to do the responsibilities and obligations we are creating for them?

Mr Iddrisu spoke about the Pre-Tertiary Bill saying one of the Bills sought to make secondary education a part of basic education, which was unconstitutional.

He cited Articles 25 through to 38 of the Constitution saying “The President is doing a constitutional wrong to say that secondary education should be part of basic education. He should also not forget that Ghana is part of the West African sub-region. Has he asked our neighbours whether they are doing same?

He said because there must be congruity, what the President is doing is incongruous with acceptable practice and norms in West Africa as far as basic education is concerned. Even by UNESCO definition, basic education is normally from Creche up to JHS.”

Mr Tug-uu Ametus, Tamale Metropolitan Director of Education, who received the desks and handed them over to the headteachers of the beneficiary schools, said the education sector required the support of all lauding the MP's intervention.

Mr Ametus said there was inadequate furniture at the schools in the area commending the MP for the gesture, which would help to ameliorate the situation and ensure the enabling environment for quality teaching and learning at the schools.