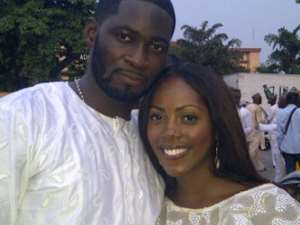 All may not be well with Tunji Balogun otherwise known as Tee Billz, if his tweet is to be taken serious. The boo of sexy singer, Tiwa Savage wrote on twitter yesterday probably informing the world of a problem he might be going through barely four weeks to their traditional wedding on November 23, 2013.

Tee Billz posted on his twitter page at exactly 1:03am on Tuesday that, "Can't sleep....I See Dead Ppl."

Tiwa Savage should be in London by now shopping for her wedding dress, while her sweetheart cannot sleep because of dead people allegedly disturbing his sleep.

We don't know if Tee Billz is hallucinating or has involved himself in some secret things.

Calls put through to Tee Billz' phone number by Nollywoodgists.com were not picked as at press time.

"It's a great time to invest in Ghana, the safest country in...
54 minutes ago