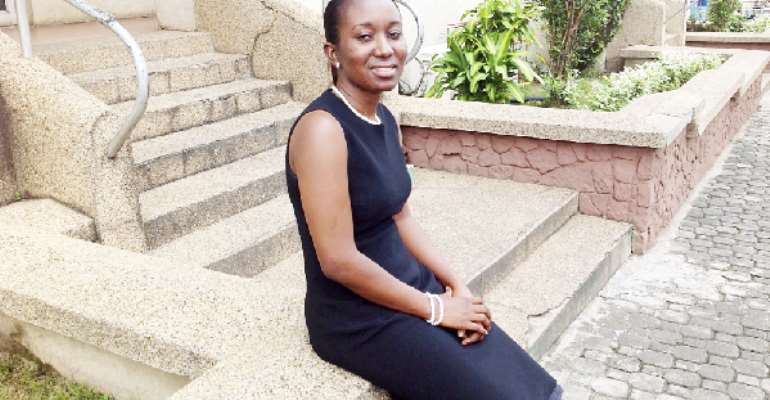 'It is the dream of every law student to win the Mensah Sarbah Memorial prize. This is because it is a noble and prestigious prize, and wining such a prize is a dream come true, and will cherish it all my life.

The feat of winning such a noble prize has really humbled me, and it is my hope and prayer that the achievement would goad me on and reflect in my practice.

As I am beginning my pupilage, I must continue to learn from my seniors at the Bar and allow them to take me through the practice so as to excel  and meet the expectations of my clients.'

These were the sentiments of Miss Hagar Addo who was adjudged the most oustanding young lawyer out of the 183 lawyers called to the Bar last Friday, October  4, 2013.

Beaming with smiles as The Mirror engaged her in a chat moments after she was presented with the Mensah Sarbah Memorial prize for the Overall Best Student  in both the part one and two  examinations of the Ghana Institute of Law, Miss Addo noted, 'This prize is a huge achievement. This is because every course offered at the Ghana School of Law is very technical and difficult,  so I am hopeful that the award will motivate me to practise in a manner that would reflect the academic excellence associated with the prize.'

Prior to the presentation of the Mensah Sarbah Memorial prize, Miss Addo, who is a product of the Kwame Nkrumah University of Science and Technology (KNUST), had also been presented with the Civil Procedure prize.

According to Miss Addo, the Civil Procedure involves  instituting civil claims and conducting civil actions in court, and trusted that the award would play a significant role in her practice.

On why she chose law as her profession, Miss Addo said,'I have always wanted to practise law in Ghana; so in pursuit of that dream, right after my first degree in BA Publishing Studies at the  KNUST and my national service at the Komfo Anokye Teaching Hospital, I applied and gained admission  to the KNUST Law School.

She said there was keen competition among her mates, as they were all very focused on their academic work, with no room for complacency.

On how the academic excellence would reflect in her practice, Miss Addo said being coherent and  properly articulating her thoughts during court proceedings, as well as effectively applying the law in court, were some of the means by which she  would prove that the prestigious awards presented to her by the Chief Justice, Her Lordship Justice Georgina Theodora Wood, were not a farce.

'I want to be a very respectable lawyer; a lawyer who does not only uphold the integrity of the noble profession, but my own integrity as required by the legal profession,'  she said.

On the perception among  a section of the public that some lawyers are liars and always twist  the law to suit their parochial interests, Miss Addo dismissed it as  a wrong perception without  basis.

'The perception that  lawyers are liars is a wrong perception because it is only the law that they apply in court, in accordance with laid down procedures.

Ms. Hagar and some of her colleagues after they were called to the Bar

A lawyer cannot simply go to court and tell  lies before his colleague lawyers and a sitting Judge who is well abreast of the law. People have that perception because they do not understand  law, much more the procedure of applying it in the administration of justice,' she explained.

Acknowledging that law is a dignified profession, Miss Addo urged up-and-coming young ladies to venture into the profession with the view of developing their potential more meaningfully to be in the position to support  sustainable socio-economic development in the country.

'Young ladies should have the confidence and courage to join the law profession because it is a noble profession which is likely to open more avenues for them,' she encouraged.

Looking into the future, Miss Addo is optimistic that 'the future is very bright and promising. This  is because as a young lady, I have more opportunities to learn from many experienced and accomplished lawyers at the Bar. My seniors will be willing to teach me all that I need to know to have a successful career. All I pray for is good health and long life,' she noted.

Born on May 16, 1984 to Madam Mary Poku (deceased), and Mr Andrews Addo in Kumasi, Miss Addo, who is the eldest of five children, started her basic education at the Tweneboah Koduah International School at Abuakwa before moving to Prempeh Junior High School where she completed in 1998.

She gained admission to the Armed Forces Secondary -Technical School in 1998 and came out successfully in 2001, and in 2002, she entered the KNUST  to pursue  a degree programme in Publishing Studies and graduated with Second Class Upper honours after four years.

'It was when I was in the  second year at the KNUST that the university introduced the Law School. Since I had keen interest in becoming a lawyer, I  challenged myself to gain admission to the school, so right after my national service,  I applied and fortunately for me, I was offered admission in 2007,' she recalled.

On the main challenge that confronted her as a law student, Miss Addo said she lost her mother during the second year of her admission to the KNUST Law School.

'I have never known my father.  It was my mother who single-handedly raised me up, together with my four siblings, so I was very devastated when my mother died in 2008. Since my mother was solely responsible for my education and that of my siblings, I became financially handicapped when she died.

She specifically mentioned Rev. George Obeng of the Mighty World Chapel as someone who supported her tremendously during the turbulent days, and prayed for God's blessings to be showered on him abundantly. She also mentioned Nana Osei Pipim as one of the family members who came to her aid.