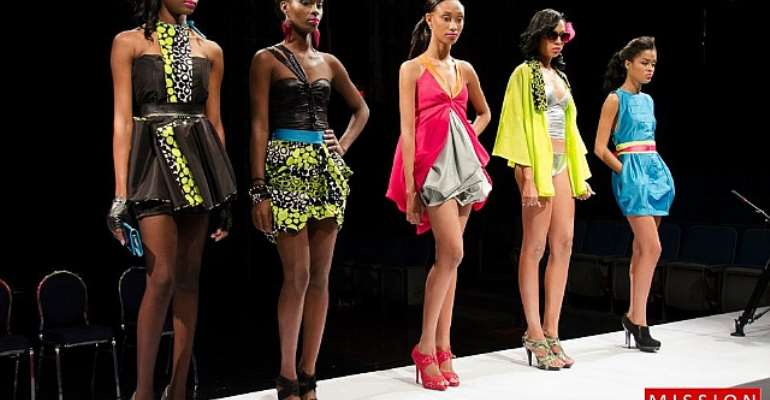 The designers were divided into two groups of five. Group A comprised Keshon Hawthorne, Janel Jolly and Crystal Powell of Jamaica; Kerin Scott of Barbados and Belize's Rebecca Stirm. Group B included Kesia Estwick of Barbados, Ryan Chan of Trinidad, Janelle Forde who represents both Barbados and Trinidad, Guyana's Ryan Berkeley and Gregory Williams of Jamaica. The designers were given preselected fabric from Pablo's that represented the vibrant colours of the stylish new mobile phone

The task at hand was a tall order as the designers would be taking on the role of guest judge Dexter '3D' Pottinger who has created fashionable and innovative outfits for Digicel and its associated mobile brands over the years. The words 'fashion-forward', 'cutting-edge' and 'daring' come to mind when considering his work as a stylist, designer, make-up artist and video director.

He was duly impressed, however, with Kesia's “perfectly executed” interpretation: a pleated, tunic inspired mini-dress made of blue ottoman satin with green jersey viscose print at the back. The waistline was accentuated with a green spandex band which was overalayed with a pink satin ribbon that tied in a bow at the back for that “playful” touch.

“This piece represents very well with clean cuts, nice finish, elegant spunk, and youthful appeal. I could not have done it better myself.” says Pottinger.

Also on hand to judge the pieces was Bryan Wint, Territory Manager for Nokia, who loved the dress and said it was exactly what Nokia would look for.

For the 21 year-old St. Phillips native, her excitement is compounded by the fact that she is the first Barbadian to win a Mission Catwalk challenge.

Following Kesia was Williams, who has also won one challenge. Scott, who after her elimination returned to the show in a dramatic twist last week, had the third best design. For the first time since the show's start three-time challenge winner Stirm has failed to show in the top contenders. In the bottom three were Hawthorne, Forde and Chan. This is Chan's second time in the bottom two after having strong showings in episodes 2 , 3 and 4. The judges, host and executive producer Keneea Linton George, Jamaica Observer lifestyle editor Novia McDonald-Whyte and international menswear designer Carlton Brown still want to see what this Trinidadian has to offer, so look out for more from Ryan on next week's episode. Unfortunately both Janelle Forde and Keshon Hawthorne failed to impress and were eliminated.

Mission Catwalk is now shown in six regional countries around the region. Jamaicans can watch Tuesday nights at 8:30 PM on Television Jamaica. In Belize the show airs at 7:30 PM on Channel 5. Trinidad viewers can catch a new episode each week on TV6 at 9:30. CBC Barbados airs the series on Monday nights at 9PM. The show also airs on GTV 28 in Guyana and GBN in Grenada. Mission Catwalk is presented by NCB, Supreme Ventures and Digicel, and can be viewed online each Tuesday at 8:30PM and Thursdays at 5:30PM (Kingston time) at www.televisionjamaica.com/livetv.aspx

KESIA WORKING ON HER DESIGN IN THE SINGER SEWING ROOM