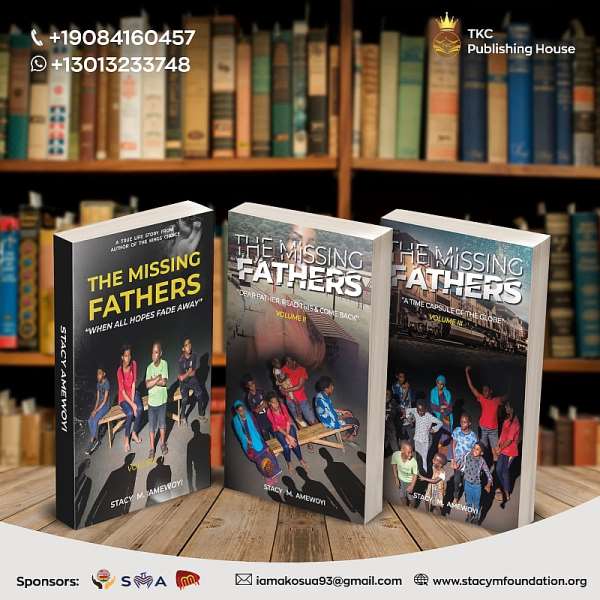 History has played a huge part in every country’s development, in both positive and negative ways with keen eyes on the situation for which event took place.

An award-winning US-Based Ghanaian author, Stacy M. Amewoyi’s recounts certain events in history that are contributing to the lives of the current generation and generation to come after, the charismatic and emphatic author focused and drew the attention of the world to parenting.

Stacy M. Amewoyi opened Ghana’s history up in MISSING FATHERS by taking a look at events such as the overthrow of governments with late ex-President Jerry John Rawlings's 1979 coup documented by the author. Though he had the coup, his intention was clear and that was to hand over power to Hilla Limann, however that event triggered several others which then transformed Ghana or set the country on a different path to date.

Most notably included the 80s hunger which flooded the country, citizens fleeing the country to neighboring Western African countries due to hunger, and more.

The author’s take on parenting from the Western African country based on the aforementioned counts to many other events elsewhere around the world. Furthermore, the fraction of humans that are affected mostly when parents absent themselves are children, and it’s not an African situation rather global occurrences that have happened over and over again, hence, rendering many children homeless, or finding refuge in either external family members or in foster homes.

Harking back to the well-patronized celebration of 400-years since the first batch of slaves were shipped from the shores of Ghana to the United States in what was termed Year Of Return, A lot of diasporans returned back to Ghana in 2019 to celebrate with the country, and most importantly to reconnect with their roots, clutch to their heritage and many other benefits.

MISSING FATHERS detailed how most of the returnees for the Year Of Return celebration gave the count of tracing their ancestral paths to the country. While some have been able to meet their great grandparents, others couldn’t but for the fact of them coming back to the country where most of their ancestors once lived, it was enough for them to bring them to peace of mind.

Amazingly, Stacy M. Amewoyi provided vivid statistics of what confronting the globe now from the decisions of the fathers (parents), she took a look at what impacts these have on both the girl and boy child. In the situation, she pointed out how the girl child needs special attention most especially from their parents, rather than other guardians who wouldn’t be willing to provide a listening ear to their demands. Even though, the boy child also needs attention that can’t much that of the girl child.

The novel is in three volumes, the first part talks about how fathers left, novel two saw a plea from children on father who are still around to come back into their lives and last one recount the stories of great people who have grown up to occupy relevant positions on the global table, Stacy M. Amewoyi cited former President of the United States, Barack Obama and others as an example.

Stacy M. Amewoyi is also the author of award-winning books such as The Kings Choice, The Price Of Love, The Languages and Key Of Love, AND THE KING CHOICE.

Inside Politics: Political Quotes
Catch up with all the political quotes from our politicians.
Sponsored
More Family & Parenting
Modern Ghana Links
'May You Be The Mother Of Many Sons...'
Do Your Children Know Their Vagina Or Penis By Its Name?
Majority Of Young Adults Now Live With Parents Amid Pandemic
Moving Away
Early Marriage And Social Betterment
How Quitting Smoking Can Make Fathers The Real Heroes Of Their Children!
The Ninani Group Recognizes The Contributions Of Fathers With Gifts On Father's Day
Would Your Child Benefit From Home Tuition?
How To Save Your Husband From The Hands Of Side Chicks
Election Reports Quotes Dossiers
TOP STORIES