John Kumah Honoured For Deepening The Culture Of Entrepreneurship 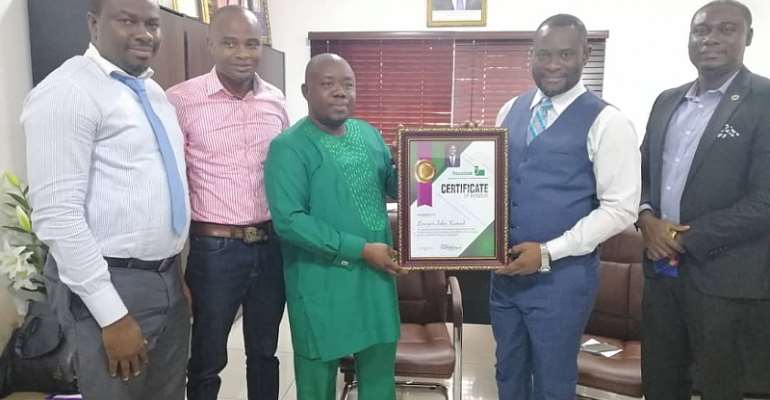 The Chief Executive Officer of the National Entrepreneurial and Innovation Programme, Lawyer John Kumah has been recognized by the Voiceless Media and Consult for deepening the culture of entrepreneurship among the youth of Ghana at a brief ceremony in Accra.

Presenting a certificate of honour and a Personal Accident Insurance Cover of up to Ghx40,000 for a year from the Best Assurance Company to the NEIP CEO, Chief Akilu Sayibu of the Voiceless Media praised the Business Development Ministry and the NEIP for its entrepreneurial support to the youth who hitherto would have been unemployed to the detriment of the Country.

According to a research by the Voiceless Media and Consult, the NEIP under lawyer John Kumah has trained about 19,000 startups in Ghana within 2 years and funded about 4,350 of them with capital ranging from Ghc10,000 to Ghc100,000 to not only start their own businesses but to also offer employment for other people through their businesses.

This the Voiceless Media sees to be profoundly good hence the honour.

The Voiceless Media has also commended the NEIP for initiating across Senior High Schools and Universities the culture of entrepreneurship saying that, this module of the NEIP would inculcate into the youth huge entrepreneurial sense at early stages and described it as very encouraging.

Chief Akilu Sayibu says his monitors and researchers discovered that under Lawyer John Kumah, the NEIP facilitated the setting up of one of the biggest greenhouse estates in West Africa at Dahwenya in the Greater Accra Region.

This according to the Voiceless Media was most recommendable and deserved recognition.

Receiving the honour Lawyer John Kumah who is also an Aspiring Parliamentary Candidate of the NPP for the Ejisu constituency thanked the Voiceless Media for the honour and said he was dedicating it to all staff at the NEIP explaining that the recognition was for all of them for their hard work and not for him alone.

He disclosed that the recognition accorded them would inspire them to do even more for the NEIP.

At the presentation, ceremony were members of the Voiceless Media and Consult led by Chief Akilu Sayibu and some staff of the NEIP in Accra.