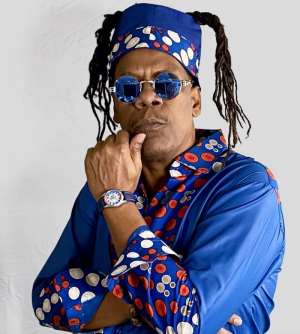 Veteran Reggae Entertainer, Pupa Curly is set to release the music video for his new single “Gimme a Chance “in the next two weeks. The new song has been making waves across the globe since its release after he teamed up with Afro–Punta hitmaker and producer Junie Mar.

Pupa Curly made this known in an exclusive interview with DJ Ras of Sankofa TV and Radio in Virginia that was monitored by TheAfricanDream.net online.

The Belizean Reggae star Pupa Curly revealed that he considers himself an edutainer rather than an entertainer. Describing himself during the interview — “Pupa Curly is a conscious edutainer because we educate as we entertain, and try to be an activist for the youth.”

Narrating how his journey started as a musician, he stated that his first single titled “Crack is a Killa” was meant to drum home the effects of crack cocaine as a dangerous drug at the time, as it emerged in urban American culture during the 1980s in the United States.

He says there was the need to chronicle what was going on in the world at the time using music as a tool, further saying that “from that time up till now, what I do is keep putting out music and staying up with the times.”

The Musician also stated to DJ Ras in the interview that he could not be described as doing one genre of music. It is hard to corner him in one genre, but as he was growing up into reggae and dancehall, the Belizean transitioned into the conscious side of reggae by influence from the likes of Bob Marley and others. “Everybody points to Bob Marley but it has to do with the way I articulate my lyrics. I want to put it out there in a English [sort of way] so that people can understand what I am saying and I think I got that from him.”

Commenting on one of his tracks about democracy titled ‘Democracy Weh’ and released late September of 2020 under his Tuff Kruffy Entertainment Label, he stated that democracy was in troubling times as many leaders across the globe were not selfless as they should be and keep flouting the tenets of this system of government to the detriment of the people…

“If you could look all around you democracy is in trouble so that is where this song came from, watching all the trickery within the democratic process, this is where the lyrics came from. It went to sleep, you could go all over the world and it’s the same thing. Even in my little country, nothing is different, just redrawing the lines to get votes.“

Pupa Curly touched on his tremendous visit to the Eastern African country of Uganda where he undertook various initiatives relating to his music career. “It was a great feeling especially as I have been singing songs about setting free Mandela and all these conscious songs with Africa [in the] lyrics and I finally got to be on the ground. Don’t forget I am also close to the youths. I actually went to the heart of Kampala and shot a video called ‘Lives R Not Games’ with some youths and to date, I am still in touch with these youths.“

He says his next single called “Going Back Home” was still in the pipeline and would come out later as he prepares for a visit to Ghana in West Africa connected to the track and some work he is doing with the African Diaspora Development Institute (ADDI) under the leadership of the former African Union Permanent Representative to the United States — Dr. Arikana Chihombori-Quao.

Pupa Curly grew up listening to his mother’s American country and western and rhythm and blues collection. But by his teens, he discovered reggae through Bob Marley, Yellowman, and General Echo and they became a great influence on his musical style. In addition to reggae, Pupa Curly also released Afro-Punta singles like ‘Wake Up Mama’, and ‘Habinaha Whama’ an Afro-indigenous cultural vibes influenced by the Garifuna people originally from Saint Vincent – a blend of African and Arawak indians.

In August last year, he released his long-awaited full-length album “GRIOT“ featuring an incredible supporting cast that included Eljai, Sweet Tea, and Edee. The album is produced by Carl McGregor of Diamond Mine Studio in Los Angeles. GRIOT is the first full-length project in over two decades by Pupa Curly and it was released on Tuff Kruffy Entertainment label.