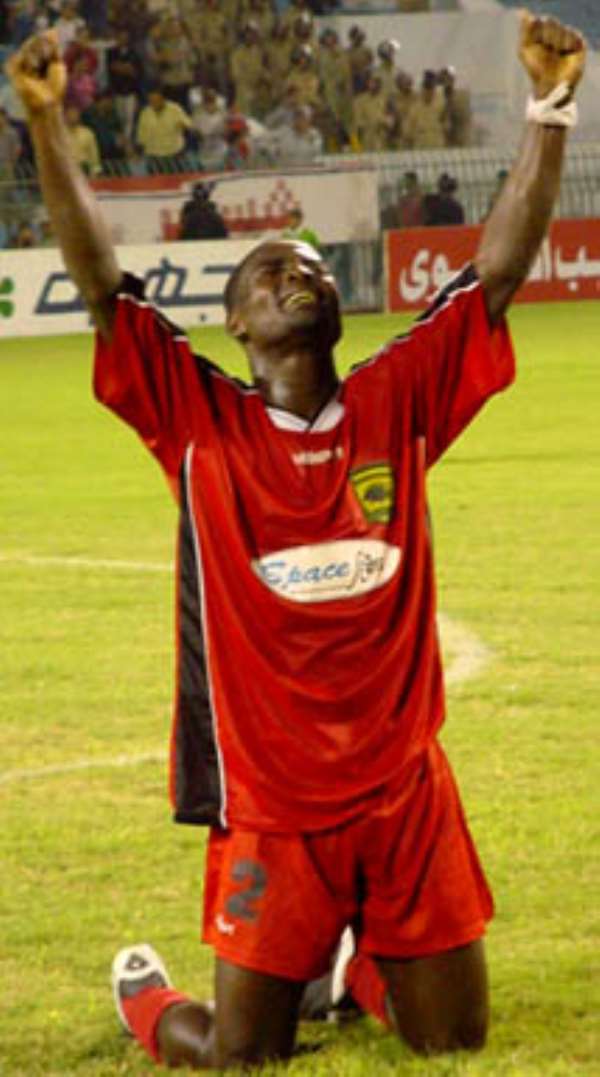 ....Liberty Say No THE management of Liberty Professionals have rubbished suggestions that Michael Osei could make a surprise U-turn to Kumasi Asante Kotoko just a week after completing a move for the striker.

In a rather bizarre turn of events following agitation by the club's supporters, Kotoko's new caretaker management seems to have regretted the decision by former CEO, Maj. (retd) Yaw Larson to transfer Osei to Liberty on a three-year contract. They have reportedly begun moves aimed at reversing last week's deal.

Liberty's chiefs, however, say the deal is closed and Kotoko must forget about Osei this season, as he looks set to make his first appearance in coach Cecil Jones Attuquayefio's team for Sunday's GT Premiership match with Real Tamale United.

“They must wait and see what happens on Sunday,” says Liberty President Alhaji Sly Tetteh, indicating that Osei will make his first Liberty appearance this weekend. “We completed the deal and we have his card and so the case is closed.”

However, the club's Chairman, Mr Felix Ansong, in a rather tongue-in-cheek response, gave the Porcupine Warriors a window of opportunity of a possible return of the striker — but not before the end of this season.

“Well, if Kotoko are still interested in the player then they must wait till next season and come for negotiations. If they are prepared to pay big money we will be ready to release him,” Mr Ansong told Accra-based radio station Radio Gold last Wednesday.

After five seasons with Kotoko, out-of-favour Osei and defender Daniel Yeboah were both offloaded to Liberty last week in a swap deal for Liberty's offensive midfielder Osei Akoto.

Yeboah, alias Argentina, makes a return to Dansoman after joining Kotoko from Liberty two seasons ago but failed to hold down a regular place in the Porcupine Warriors' first team.

Liberty's move for Osei further strengthens the club's determination end years of underachievement and pursue an audacious ambition to win the GT Premier League this season.

“This year it is our aim to win the ultimate prize —the premier league title — and to achieve this we need a strong team of a fine blend of experienced and young players, who can offer strong challenge to both Hearts of Oak and Kotoko. It is to fulfil this target that we brought back Jones Attuquayefio from Hearts, to strengthen the technical team,” Alhaji Tetteh told the Graphic Sports.

Liberty's big ambition is set to receive a further boost in the coming weeks when the club signs on former national star Peter Ofori-Quaye, to feature prominently for the club this season.

After a promising career in Europe that was blighted by injuries, Ofori-Quaye is now ready to re-launch his career after nearly two years out of action during which he sought comfort back home in Accra to recuperate from a career-threatening knee injury that twice went under the surgeon's knife.

The young striker has started training with Liberty and is likely to make an appearance in coach Attuquayefio's team soon when his contract is sorted out.

The return of offensive midfielder Michael Helegbe and injured striker David 'Reggae' Boateng is expected to give Liberty a sharper cutting edge in domestic competitions.

Helegbe has just been transferred to Norwegian side, SK Brann, but was compelled to return to Liberty for the next three months until the European transfer window re-opens.

A striking quartet of Osei, Ofori-Quaye, Boateng and Felix Baffoe has the potential to become a banana peel for opposing defenders in the premiership, and under the 'Messianic' guidance of coach Attuquayefio, the Dansoman club have every reason to dream big.

This season too, Liberty's financial clout has been further reinforced with an ¢800 million sponsorship from Panasonic. And for a side often spoilt for choice, the Dansoman club still has on their shopping list about two more players whose identities are being well guarded.

For Alhaji Tetteh, the decision to sign on a big name player like Osei does not water down the club's recruitment policy. It has become necessary for some flexibility in order to inject more quality and experience into the team to reflect their new focus and ambitions.

“At Liberty we believe in investing in young players but it takes a while for them to mature, so we decided to add a few experienced guys so that we get off to a good start this season. If our avowed aim to win the premier league is to be given real meaning then we must start well and end well.”

Since joining the elite division five seasons ago, Liberty have maintained a recruitment policy that emphasises on unearthing young talents from lower divisions, the club's academy and schools rather than splashing huge sums for big name players.

Thus Liberty, have become the conveyor belt for players for the junior national teams and also groomed such star players as William Tiero, Emmanuel Pappoe, Michael Essien, Derrick Boateng, Asamoah Gyan, among others.