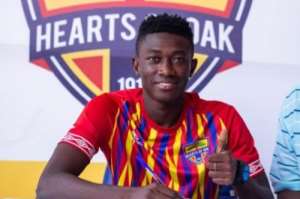 Hearts of Oak have through a statement rubbished reports indicating that midfielder Umar Manaf has asked for money from Ghanaian actress Efia Odo as they explain the player’s Twitter account has been hacked.

This comes after the Twitter account of the player left a number in the comment section of a Tweet from Efia Odo after she had asked her followers to drop their mobile money numbers to receive cash.

After the news of Manaf seeking cash from the actress went viral, Hearts of Oak has jumped to his defense with the explanation that he did not make the request himself.

According to the club, someone hacked the attacker’s account to make that request.