How Jordan Ayew Has Stepped Out Of His Brother’s Shadows 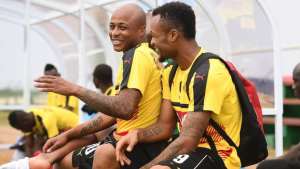 One of the most fascinating narratives of the 2019-20 campaign in England’s top-flight has been that of Crystal Palace and Ghana striker Jordan Ayew.

While his elder brother Andre Ayew has often been regarded as the superior player and achieved more trailblazing antics in his career, Jordan Ayew has very much stepped out of his shadow this season and established himself as a leading Premier League marksman.

With Andre on the books of Championship side Swansea City, Jordan has been free to express himself and carry the family name (he is the son of Ghanaian and African great Abedi Pele) in the English top-flight, and he has thrived with the responsibility given to him by Palace manager Roy Hodgson.

A return of eight Premier League strikes may not seem all that significant, but in fact it accounts for almost a third of the 26 goals scored by Palace this season, underlining just how important Ayew has been to their campaign. The Ghanaian’s goals have directly accounted for 17 of the 39 points the Eagles have accumulated – without him, Palace would be relegation fodder.

A greater responsibility and maturity has helped Ayew thrive, as has Palace’s counter-attacking style, which very much allows him and fellow African star Wilfried Zaha to use their pace and skill in one-on-one situations to devastating effect.

Hodgson believes Ayew’s acquisition has been a key factor in their season: “We signed him in the summer, but we paid money to loan him last season, and he has shown his worth all the way through. I think he has got stronger, and we saw signs last season when he wasn’t succeeding as much in terms of goals and assists, but I am delighted for him.”

Ayew has also levelled compatriot Tony Yeboah on 24 Premier League goals – this most by a Ghanaian. While Yeboah achieved the feat in just 47 matches compared to 128 for Ayew, the legend still believes the Palace man deserved immense credit.

“[The English Premier League] is not a small league but Jordan scoring 24 goals means that the future is bright for him despite playing more matches than me,” explained Yeboah. “Looking at his age, he can add more goals if he continues to play in the Premier League.”

If and when the Premier League resumes, Ayew will be hoping to continue growing his own legacy and ensure that he drags Palace along with him.