I Have Unfinished Business With Dreams FC - Philemon MacCarthy 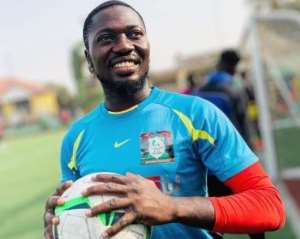 Goalkeeper Philemon MacCarthy says he has unfinished business with Ghana Premier League side Dreams FC and has returned to complete it by helping the club to finish in an appreciable position in the 2019/2020 league season.

“I’m here to continue from where I left off because I believe I am not done with what I started so I am here to accomplish it,” he told Graphic Sports Online.

According to him, rejoining Dreams FC was one of the best decisions taken in his football career describing the club as “home” for him.

“Dreams FC is now part of me. It is home and I believe I am going to feel at home. I see the club as home because they gave me something that my previous clubs such as Feyenoord, WAFA and Hearts of Oak could not give me and I am talking about my first ever professional contract abroad,” he stressed.

Commenting on his plans for the club he said: “Well I’m just going to work hard to help the club achieve its objective and goals of finishing well this season.

The 36-year-old goalkeeper also mentioned that insufficient playing time forced him to leave the club during the 2017/2018 season.

“On and off-pitch life here at Dreams FC ignited my resigning but I am happy to be back to complete what I started.”

MacCarthy signed a three-year contract with the club on Wednesday, April 22 after passing the mandatory medicals.

He returned to Dreams during the 2017/2018 season after having had a short stint with Israeli club Hapoel Afula FC and is famously remembered by the fans of the club for his historic strike against New Edubiase FC at the Theatre of Dreams, Dawu during the 2016 league season.