FEATURE: Why African Teenage Superstars Fail To Reach Their Potential 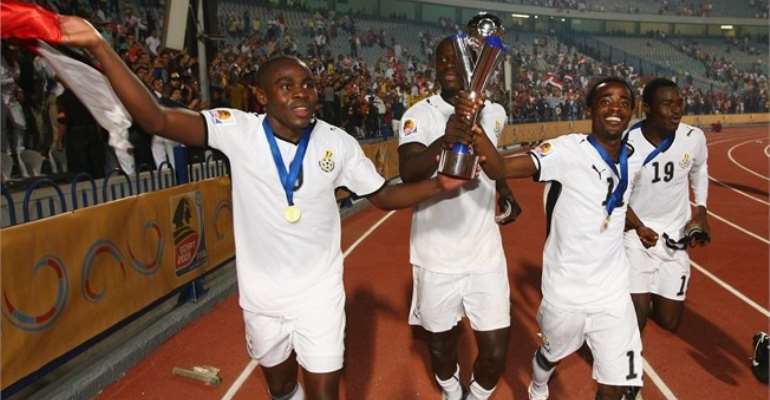 Despite the imposing performances of African teams at age-grade tournaments, it has become troubling that these feats so far have not borne fruit at senior level.

The troubling part is that most of the players discovered at these championships never justify expectations, as they end up failing to realise their potential.

The likes of Philip Osundu, Moussa Traore, Nii Lamptey, Ishmael Addo, Macauley Chrisantus, Dominic Adiyiah and Sani Emmanuel took the world by storm and were tipped for greater things thanks to their exploits at youth level.

Sadly, before the applause died down, they disappeared from the footballing fraternity.

For those who never went into oblivion easily, they play in obscure football leagues where they struggle to get the first-team action.

As a follow up to Seye Omidiora's Nigerian wonder kids who never realised their potential, Goal engages Henry Abiodun in a no holds barred chat to explain why most African wonderkids fail to fulfil their potential.

Coach Abiodun is a seasoned and well-travelled football tactician.

Currently, he is the director of coaching education at Football Coaches Association of Africa Nations (FCAAN).

“The commonest one in Africa is usually the falsification of age. Right now, I think it is getting better with the birth of MRI and the world monitoring Africans in this regard,” Abiodun told Goal.

“That is why you see African teams now trying to work on their very young talents – this has helped reduced cases of age cheats. In Nigeria for instance, we now have the U13 and U15 titles.

“Years back, we do not have all these because I recalled about 10 years ago when I asked how we have managed to win the U17 World Cups without having a youth department, then something is wrong.

“Age falsification has dragged us behind a lot because we have always invested in the wrong set of people, and by the time you are expected to reap from them, they start nosediving. When we play at U17 competitions, most African teams rely on our physical attributes which is one out of the six areas of physical fitness.

“In youth football, when you play players who are within 23-25 years against those below 16 and 17 years, they tend to be faster and stronger because of the style of play that is physically oriented and we end up winning.

"You will realise that in recent times, it has been difficult to win because we are beginning to understand that these age-grade tournaments are not meant to be a do or die affairs, instead of developmental tournaments where these boys will be exposed and get mature towards becoming men.”

To the former Sunshine Stars boss, the instructions young footballers get from their coaches at a developing stage go a long way in making or destroying a footballer’s progression.

According to Abiodun, a player who is exposed and has assimilated a wrong approach to the beautiful game as a teenager will continue to decline when much is expected from him, because his technical, intellectual and psychological spheres have been conditioned with an erroneous orientation.

“Another area that has set us back is the area of coaching education which is a neglected area. If you ask most of the federations including ours in Nigeria, you will be told they have a technical department,” he continued.

“When they join European teams to play professionally, they cannot improve optimally because they have not been exposed to the technical, tactical, psychological and intellectual areas of football fitness; a sharp contrast to their counterparts abroad who receive these as early as 12 years of age.

“But it’s good to know that today; we have organisations like FCAAN, who are exposing coaches at grassroots level to the modern trends of training players.”

The media plays an indisputable role in the growth of football, and sports at large. Nevertheless, the press has its own share of blame owing to the publicity they give these players – which often makes them feel bigger than what they are, thus halting their improvement.

“The third factor is what I call the media bias. Because a newly recruited player impresses in just one game, you start seeing journalists christening him after a household name like: ‘Little Messi’, ‘Carbon copy of Kanu’ ‘Mikel in the making’ etc," Abiodun continued.

“We get into his heads, give him high hopes and sometimes this becomes a problem for the player because we have elevated him above what he is and his abilities.

“Before you know it, the Super Eagles coach is been pressurized to invite him to the senior national team. What I’m trying to point out here is that we over-hype players when it is not yet necessary.”

Bad agents and poverty are also been touted as excuses on why most African youngsters fail to ignite the spark that brought them to the limelight. Coach Abiodun gives an insight into how these operate.

“When playing for their domestic teams, these youngsters put in all their best and stay focused to ensure they get national team invites and get a contract from foreign teams," he added.

"The moment they step ahead all they now think of is money because they are from abject poverty and their family and community now rely on them for survival.

“Instead of focusing on training and continue to improve and develop, he starts thinking about how to buy a house for his mum, buy things for his friends and how to travel down-home to showcase what he has. That becomes a problem too

“Finally, the players’ agents, these are the players’ agents. They see a young player in Africa and the next thing is they want to take him to Europe. They are not taking the player because of his talent, they are doing that to make money for themselves.

“They misguide these players because they understand their background and any little money for them is good. They rush and sign out their lives.

"The moment money starts coming, they lose concentration and once that happens the commitment level and productivity drop."

Despite this, it is worthy to note that some have surpassed the expectations placed on them, names like Nwankwo Kanu, John Obi Mikel, Samuel Eto’o, El Hadji Diouf and Seydou Keita come to mind.

Should there be a holistic approach to solving these challenges, like proper coaching education, severe punishments for age cheats, and making the leagues in Africa more attractive, the day when an African team wins the Fifa World Cup would edge nearer.

Your God-fearing attitude, refusal to tenaciously cling to p...
17 minutes ago