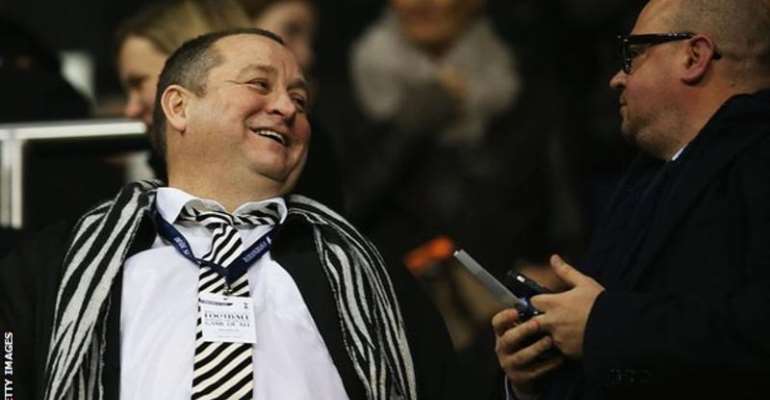 Mike Ashley took charge of the club in 2007

A Newcastle United takeover is very close after new documents show that owner Mike Ashley has entered into a charge agreement with potential buyer Amanda Staveley.

It is understood to be worth £300m.
The 31-page charge agreement lodged at Companies House lays the legal groundwork for a potential deal to be completed.

The documents include details of £150m related to PCP's long-running legal case against Barclays Bank PLC.

The Premier League have also been informed of the potential deal and are understood to have begun the process of carrying out checks under its owners and directors test.

Newcastle and Staveley would not comment when approached by BBC Sport.

Ashley said in October 2017 he wanted to sell the club after 10 years in charge.

Initially, the deal was said to have been worth £340m, but the latest development will encourage many Newcastle fans who want to see Ashley end his association with the club, having taken over in 2007.

Supporters have cited a lack of ambition and have also criticised his conduct during the coronavirus pandemic where the club has charged fans for next season's season tickets.

There has also been disappointment at Newcastle being one of three Premier League clubs to have placed their non-playing staff on furlough.

News of Saudi Arabia's sovereign wealth fund being involved in a takeover first emerged in January.

At that stage talks were described as "advanced" but "complicated" and there was criticism of Saudi Arabia's human rights record from Amnesty International.

Staveley, who is believed to want a 10% stake in Newcastle, first attempted to buy the club in 2018.

Sports finance expert Kieran Maguire told BBC Sport: "These are steps you'd expect to take place in respect of a takeover, it seems that things have accelerated.

"The trouble with Mike Ashley is that until you see the final documents, it's never completed but the other parties would not waste their time like this unless there had been progress in terms of a takeover."

Anti-gay bill : Tell foreign missions if they provoke us we'...
15 minutes ago