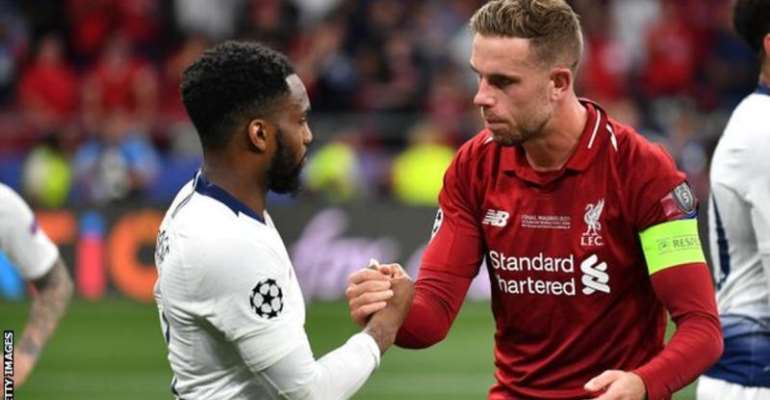 Premier League players' "backs are against the wall" over discussions about wage cuts, says Danny Rose.

Top-flight clubs have agreed to propose a 30% cut to ease the financial burden of the coronavirus crisis.

There had been criticism for the slow response from football, while some clubs - including Newcastle - have placed staff on temporary leave.

"We're all keen to make something happen," Rose, who is on loan at Newcastle, told BBC Radio 5 Live.

"I can only speak for myself but I would have no problems whatsoever contributing any of my wages to people who are fighting this on the front line and to people who have been affected by what's happening at the minute."

The Premier League has agreed to use the wage cuts to advance £125m to the EFL and National League, and give £20m towards the NHS.

Earlier, captains of clubs - led by Jordan Henderson - had held talks about possible donations to charity during the pandemic.

"We sort of feel that our backs are against the wall. Conversations were being had before people outside of football were commenting," Rose, who has been loaned to Newcastle by Tottenham, added to the Friday Football Social.

"I've been on the phone to Jordan Henderson and he's working so hard to come up with something.

"It was just not needed for people who are not involved in football to tell footballers what they should do with their money. I found that so bizarre."

On Thursday, health secretary Matt Hancock said footballers should "take a pay cut and play their part", as some clubs placed non-playing staff on the government's furlough scheme.

Chair of the Digital, Culture, Media and Sport committee Julian Knight has written to Premier League chief executive Richard Masters calling for action on player wages, saying clubs which furlough non-playing staff but do not impose cuts on player wages should be subjected to a windfall tax if they do not change approach by Tuesday.

The Professional Footballers' Association (PFA) has previously written to its members urging them not to agree any reduction or deferral in wages until they have spoken to the union.

The league, clubs and players representatives will be joined by the PFA at a meeting on Saturday to discuss the next steps.

Wolves captain Conor Coady said players had been looking to do something "for a while now".

"It's fantastic to see people trying to make that effort. It's something everyone wants to be a part of. As footballers, it's important we help as many people as possible.

"What's come out now is the 30% cut. We get judged every single day of our lives. The time now is to go forward and make a donation."

"Their hearts are in the right place - they wanted to have control over where money goes," he said.

"Essentially, if the players take a wage cut, the beneficiaries are the clubs. Their main concern is what is happening to this money. They are happy to put money into a pot, rather than it just vanishing.

Players, coaches and executive staff at Norwich have donated a percentage of their salaries to help local people affected by the pandemic, while players at Championship clubs Leeds and Birmingham have agreed deferrals and cuts to wages.

In Europe, Barcelona and Atletico Madrid players have taken a 70% pay cut, while Juventus players and manager Maurizio Sarri have agreed to freeze their pay for four months.