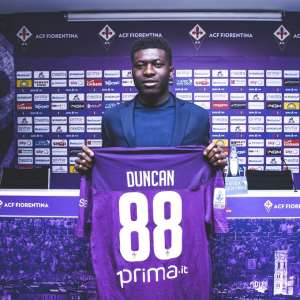 Ghanaian international Alfred Duncan is in contention to mark his debut for ACF Fiorentina this weekend when they take on Sampdoria on Match Week 24 of the Italian Serie A.

The midfielder joined the Florence-based club on deadline day of the winter transfer window with the club having an obligatory option to buy for 15 million Euros in the summer.

Earlier today, Alfred Duncan was presented to the Italian media during Fiorentina’s pre-match press conference ahead of their meeting with Sampdoria on Sunday.

During the interview session, the midfielder revealed that he has settled well into the team and is ready to feature for the Viola in their next match.

Explaining why he chose jersey number 88 at his new club, Alfred Duncan shared: “I had number '8' at Sassuolo, but here there's already a very strong player wearing that number. I feel I've improved, so I chose twice the number, with 88”.

He has recently recovered from a knock he was carrying and will play his first match for Fiorentina in the coming weekend if selected by manager Giuseppe Iachini.