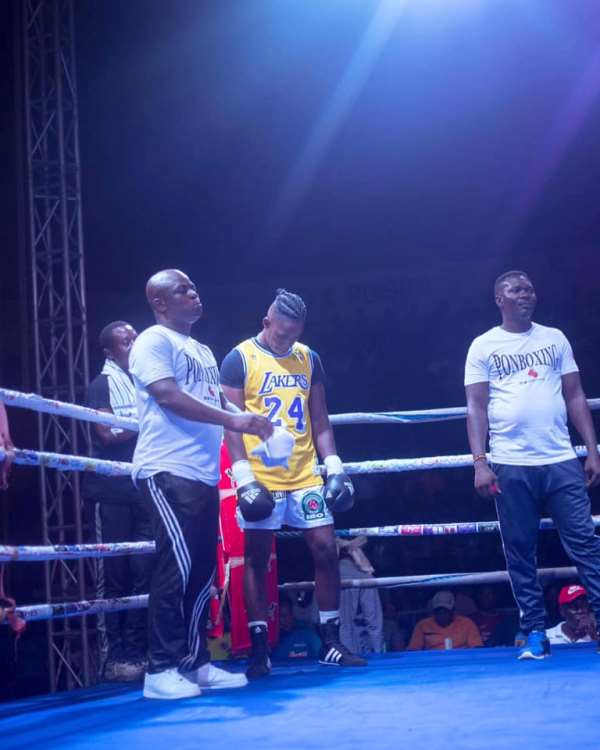 Ghana’s Prince Oko Nartey who fought on the pro level of the 2020 Fist of Fury First Week Bill at the Bukom Boxing Arena last Friday has dedicated his victory to the late American basketball star, Kobe Bryant.

He wore the LA Lakers singlet number 24 of Bryant and said he was sad to lose an idol and a legend, but the good Lord who gives and takes away knows best.

The handsome tall well built super middleweight / light heavyweight boxer was too much for Philip Kweku and just took some minutes to register his seventh triumph in eight bouts to give his fans much to cheer.

Coming back from his only lose to James Kraft at Work Your Champ Arena, Hamburg in Germany for the vacant International Boxing Organization (IBO) World Youth Light Heavy Title, he said the current win will certainly help him to rebuild his confidence and concentration.

He said on his Facebook page “Legends can never be forgotten. I went into the ring with the 'mamba mentality' and won the fight, round one stoppage”.

Oko now with a record on eight fights with one lose thanked the media who have promoted and inspired him since he joined the paid ranks. He has fought five times at the arena.

On a night of knockouts, Manyo Plange won via 4th round TKO of Sheriff Kareem of Nigeria to claim the PBC Commonwealth Super flyweight title.

Mubarak Abubakar also put up a good fight to secure a decision win against Michael Darko.