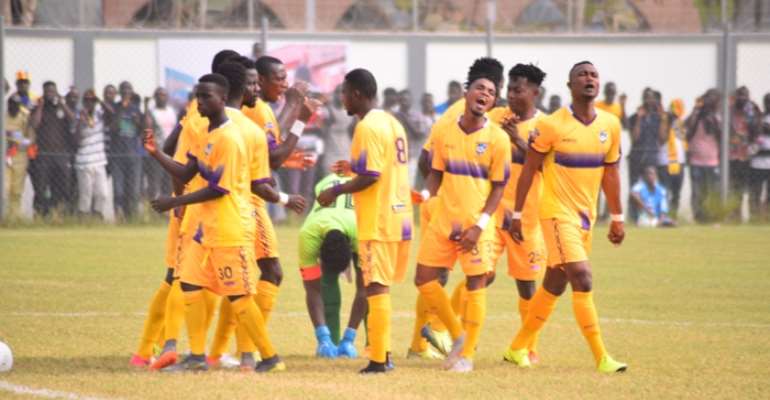 Medeama Sporting Club (SC) striker Prince Opoku Agyemang has scored his 5th goal of the ongoing Ghana Premier League season today to hand his side a 1-0 win over Ashanti Gold.

The two giants of Ghana football went into today’s fixture as the top four clubs in search of a win to try and climb higher on the log.

Both Medeama SC and Ashanti Gold went into the game on the back of defeats against Dreams FC and Berekum Chelsea respectively.

In a Match Week 6 fixture of the 2019/2020 Ghana Premier League season played at the Tarkwa Akoon Community Park, the two teams put up a good performance to fight for the available 3 points.

Following a pulsating encounter, Medeama SC came out tops with prolific striker Prince Opoku Agyemang getting on the scoresheet on the 66th minute. That equalizer has ensured the Yellow and Mauves bag 3 crucial points at the end of the 90 minutes.

In line with the win, Medeama has moved to 3rd on the League log and just a point behind Berekum Chelsea who is on top of the table.