Ligue 1: Neymar Shines But PSG Held By Monaco In Thriller 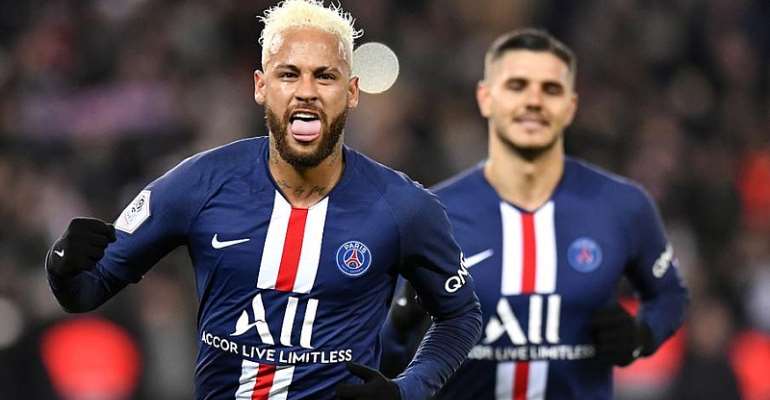 Neymar scored twice and created another goal but leaders Paris Saint-Germain were held to an entertaining 3-3 draw at home on Sunday by a Monaco side playing their first Ligue 1 game under new coach Robert Moreno.

The Brazilian gave PSG the lead after just two minutes at the Parc des Princes but Monaco scored two quick goals through Gelson Martins and Wissam Ben Yedder to move 2-1 ahead inside quarter of an hour.

A Fode Ballo-Toure own goal brought PSG level and Neymar restored their advantage from the penalty spot before halftime after a foul on Kylian Mbappe.

But Monaco, who also host PSG on Wednesday in a rearranged fixture, earned a point when Islam Slimani's goal was controversially awarded after it was initially ruled out for offside.

"We didn't put in our best performance but we tried. It was a good test. Monaco have a good team but we are superior and we must show it on the pitch," Neymar told Canal+.

"If we had played at our best we would have taken the three points.

"I think on the third goal, the fact our defender touched the ball wasn't intentional but the decision falls to the referee. They have VAR for that, we can't complain. We weren't perfect tonight either."

It was just the second time PSG have dropped points at home this season – after a shock 2-0 defeat by Reims in September – but the draw represented a positive start for former Spain coach Moreno, who replaced Leonardo Jardim at the end of December.

"We should be very happy. I'm very pleased with my players and I want to congratulate them for a great match," said Moreno.

"We played to our strengths on the counter-attack. We think we can beat any team and that's what I tell my players. That's our philosophy."

PSG had started the new year in rampant form by scoring six both times in a pair of domestic cup wins and looked on track for a 10th win in a row over Monaco after Neymar controlled a terrific Marco Verratti pass to smash home the opener.

Thomas Tuchel's side came in riding an eight-match winning streak – across which they had scored 34 goals – but concerns remained over the deployment of a prolific four-man attack against stronger opposition.

Monaco hit back almost immediately as Cesc Fabregas threaded a neat ball through for Ben Yedder and although he was chopped down by Keylor Navas, the rebound rolled into the path of Martins who tapped into an empty net.

QUICKFIRE DOUBLE RATTLES PSG
The visitors soon exposed PSG again, this time Keita Balde ran at the defence before slipping across to Ben Yedder who applied a composed finish for his league-best 14th goal.

The Monaco duo almost combined to devastating effect once more on the counter, with Navas producing a fine save with his legs to thwart Senegalese forward Balde.

PSG equalised moments later when Neymar received the ball in the box and his snapshot took a couple of deflections – the latter coming off Ballo-Toure for an own goal.

Kamil Glik headed against the post on the half-hour but PSG regained the lead on 41 minutes, Neymar converting a spot-kick after Mbappe was brought down by Martins.

Aleksandr Golovin missed an excellent chance to level before the break while Neymar was denied a hat-trick by a sharp reflex stop from Benjamin Lecomte early in the second half.

Monaco made it 3-3 with 20 minutes to go with the help of the video assistant referee system.

The linesman raised his flag as Slimani forced in from close range but replays showed Marquinhos had knocked the ball towards the Algerian, albeit inadvertently, prompting the original offside decision to be overturned.

Mbappe could have won it at the death but sliced wide on the volley as PSG drew for the first time this season in the league.

Lille's miserable away form continued as they lost 1-0 at Dijon, who played for over an hour with 10 men after the dismissal of Hamza Mendyl.

Julio Tavares scored the winning goal on 47 minutes as Dijon pulled four points clear of the relegation places while Lille blew the chance to return to the top three.

Lille are unbeaten at home but have won just once in 10 outings on the road while losing on seven occasions.