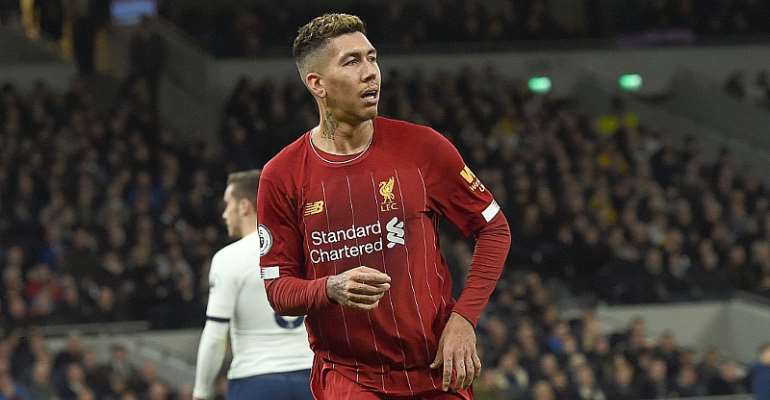 Liverpool stretched their lead at the top of the Premier League to 16 points and set a record in the process as Roberto Firmino's first-half goal secured a battling 1-0 win at Tottenham Hotspur on Saturday.

Jurgen Klopp's side were not at their best and needed to withstand a Spurs fightback after the break but hung on for a 20th win out of 21 league games this season.

Their total of 61 points is the most after 21 games of a Premier League season, beating Manchester City's 59 two seasons ago, and has never been surpassed in the Spanish, Italian, German or French leagues at the same stage.

Liverpool dominated the first half and it needed a superb block by Tottenham's 20-year-old defender Japhet Tanganga, handed his first league start, to deny Firmino with Alex Oxlade-Chamberlain hitting the rebound against the post.

Firmino struck in the 37th minute, firing in from close range, and Liverpool ended the half in total control.

Spurs, without their injured talisman striker Harry Kane, were far more lively after the break as Liverpool's pace slowed.

Son Heung-min wasted a great chance to equalise after Liverpool were caught in possession and then substitute Giovani Lo Celso somehow missed the target with the goal gaping as Tottenham threw men forward.

They could not find the equaliser though and Jose Mourinho's side have slipped to eighth in the table on 30 points from 22 games after winning only one of their last five league matches.