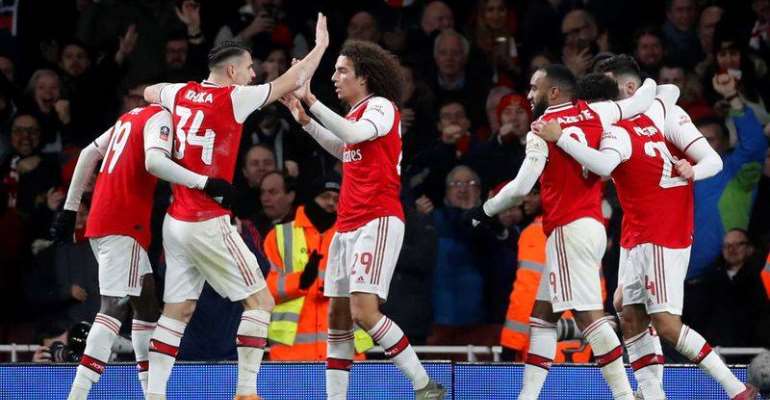 Mikel Arteta said he saw two sides of the Arsenal team he has inherited after a greatly improved second-half performance secured a 1-0 win over Leeds to reach the FA Cup fourth round on Monday.

The Gunners made Leeds pay for their profligacy with a host of wasted first-half chances before Reiss Nelson scored the winner 10 minutes into the second period.

However, Arteta was not impressed by his side's start to the game and claimed he had learned a lot from how they reacted to beating Manchester United 2-0 on New Year's Day to kickstart his reign in charge.

"Now I'm really pleased but we saw two different teams from the first to second half," Arteta told the BBC.

"I tried to tell them exactly what they were going to face and after 32 minutes we had won one duel.

"We changed our attitude, desire and organisation at halftime and then we were completely different.

Leeds will hope more regular visits to the Emirates are in store as they top the Championship and showed why by dominating the first 45 minutes.

On-loan Manchester City winger Jack Harrison twice stung the palms of Emiliano Martinez either side of Patrick Bamford hitting the bar after a wonderful team move.

Ezgjan Alioski then forced the best save of all from Martinez as he met a teasing Harrison cross at the back post.

Arteta's halftime team talk roused a response from Arsenal as Alexandre Lacazette also hit the crossbar from a free-kick.

"He shouted a lot. He was not happy because we knew they'd play like this and we didn't respect what he had said," said Lacazette on Arteta's halftime dressing down.

The Frenchman was captain for the night in Pierre-Emerick Aubameyang's absence through illness and led from the front after the break as he also had a hand in the winner.

Lacazette was played in by Nicolas Pepe and his deflected cross found its way to Nelson to convert just his second Arsenal goal.

Nelson was then replaced by another talented youngster in Gabriel Martinelli, who came closest to adding to Arsenal's lead with a low shot that was well saved by Illan Meslier.

However, one goal was enough to secure the Gunners a fourth round trip to Bournemouth.