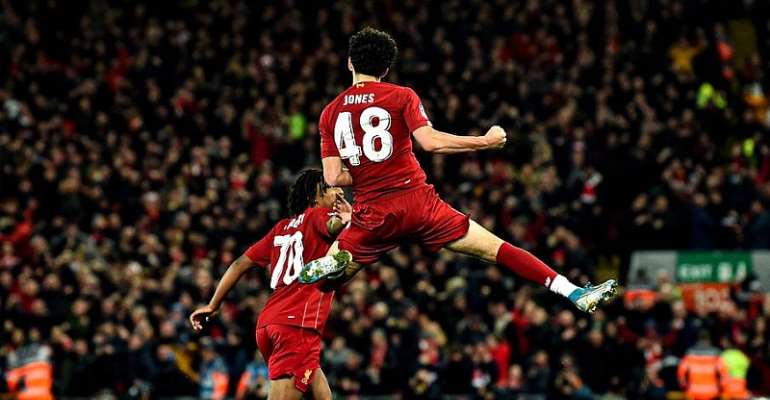 The following are three talking points after the FA Cup third-round weekend action:

CUP STILL BRINGS PLENTY TO THE SEASON
There is no doubt that the FA Cup third-round has long lost its status as one of the most anticipated parts of the English football calendar – but this weekend showed that while diminished in prestige, the Cup still has much to offer.

The Merseyside derby was the standout fixture and it was devalued by Jurgen Klopp's decision to make nine changes to his side – an approach taken by many of the Premier League clubs.

But what resulted was an inspiring and impressive performance by a youthful Liverpool side, playing most of the game with four teenagers on the field, who in the second half ran Everton's first team off the park.

The winning goal will remain long in the memory for Liverpool fans, with 18-year-old local lad Curtis Jones scoring an absolute screamer. There is no way that Jones would have started in that fixture had three Premier League points been on the table.

Less heralded, but no less impressive was the hat-trick from another 18-year-old, Norwich City's Irish forward Adam Idah, who ripped Preston North End apart on only his second senior start with a mature display of confident finishing.

Across the country, players who rarely get a chance to play on any stage bigger than the empty grounds of development and youth football got the chance to show their ability and win the affection of fans.

A REMINDER THAT THERE IS LIFE OUTSIDE THE TOP

It wasn't only the kids that enjoyed the Cup weekend - Rochdale's 40-year-old forward Aaron Wilbraham scored the equaliser that forced a replay against Premier League Newcastle United for the League One (third tier) club.

Wilbraham, playing for his tenth club, will not be known to most fans of the Premier League and nor will Sheffield Wednesday's 19-year-old defender Osaze Urhoghide.

Urhoghide was released at the end of last season by League One AFC Wimbledon having failed to make a single appearance in the third division but after a trial was picked up by Wednesday.

The Londoner was brought in to the side for his debut and helped the Owls keep a clean sheet in their 1-0 win upset win over Premier League Brighton & Hove Albion.

The player was interviewed after the game and the sheer joy and enthusiasm he showed after his breakthrough game was in such stark contrast to the usual dull cliches muttered by many top-flight players.

One of the sad effects of the growth of the Premier League into a global product is that the media shows less interest in the other three professional leagues – at least the FA Cup provides a window into that world.

BUT CROWDS ARE DOWN
For all the appeal, the fact remains that this weekend Premier League and Championship sides saw a combined drop of more than 150 000 on their previous home gates.

One idea worth exploring is for home advantage to automatically be given to the team from the lower division. It may cost some short-term revenue, but it could provide the atmosphere and spark the competition needs.