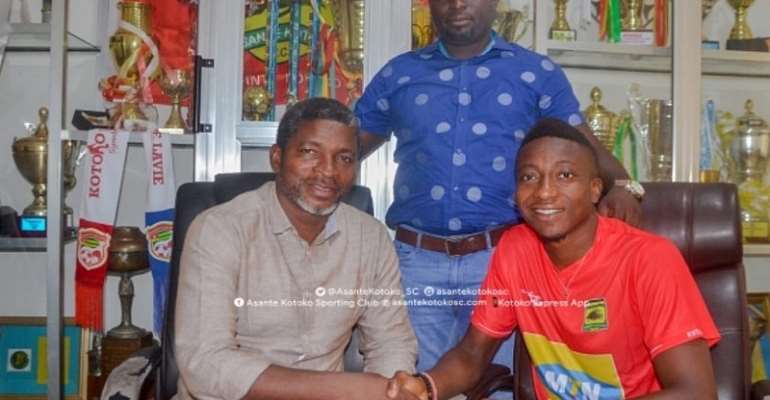 Head coach for Ghana Premier League giant Kumasi Asante Kotoko, Maxwell Konadu has noted that he is happy Felix Annan has signed a contract extension with the Reds.

The player joined the Porcupine Warriors from WAFA in 2011 and has been impressive since breaking into the first team. Despite establishing himself as the club’s biggest asset in the last couple of years, a contract renewal in the past month had become a problem.

Nonetheless, an agreement has now been reached with Kotoko officially announcing today that the shot-stopper has inked a 3-year contract extension that will expire in 2022.

Commenting on Annan’s contract extension, coach Maxwell Konadu has shared his delight whiles stressing that the goalkeeper’s services are needed at the club.

“We need his services because he is the type of player that we cannot do without. And it makes me very happy that we have extended our union to make him stay”, the experienced gaffer said.

He further said: “Felix is the captain and he is loved by the players, technical team and the supporters,'' the former Ghana assistant coach after the signing ceremony.

“He has a huge positive influence on the team. He is a very good goalkeeper and a great sportsman.

“He is a Black Stars goalkeeper and we are lucky to have a player like him in the team”.

Avoid greed, dishonesty and hypocrisy in galamsey fight – As...
52 minutes ago