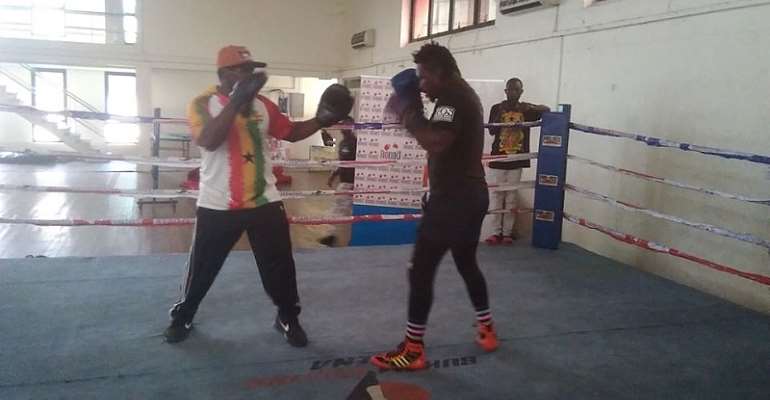 The big boxing extravaganza coming up on the mountains - Bliss on the hills Promotion on December 26 at Abetifi, Kwahu received a big boost with the assurance of top boxer on the bill, Bastie Samir to give out what people have not seen.

Speaking to a section of the sports press at the Accra Sports Stadium during a media workout arranged by Box Office, the promoters, Bastie Samir said he has a special Christmas gift for everyone who will come to Abetifi to watch the fight.

He expressed that after defeating the dreaded Bukom Banku, he has gained more power and he now looks sharper than before.

He told the media that his trainer, coach Ofori Asare has been very good and exposed him to many things in the game.

He said his opponent is coming for trouble as he will not only box to win but excite the fans, but cautioned them to come early if they want to see the real beast in him.

Coach Asare said they have prepared well for the Nigerian opponent.

Aspiring Assemblymember and classic boxing promoter, Alex Ntiamoah Boakye promised fireworks on the hills as Christmas is noted for fireworks.

He expressed that all the fine boxers on the bill are tuning up their training and Abetifi is going to cheer and the fun will be massive.

Promoter Alex Ntiamoah appealed to the government for support to put up big bouts in Ghana.

He said the Bukom Boxing Arena can generate more money is international bouts are staged there like it happens in the United Arab Emirates (UAE) where Anthony Joshua recently regained his titles.

Some of the boxers on the bill at Abetifi are Michael Ansah aka One Bullet, Sherif Quaye, George ‘Red Tiger’ Ashie, Manyo Plange and Alfred Lamptey the Bukom Bomber.

The event would be spiced with entertainment as many musicians are performing days ahead of the bouts.

Kwahu Republic and Media Excel are supporting the event.