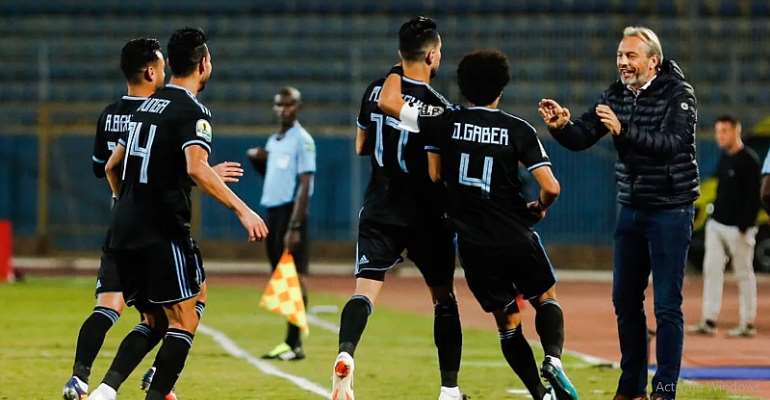 Egyptian debutants Pyramids proved too strong for fellow group stage first-timers Nouadhibou of Mauritania, thrashing them 6-0 in the Cairo based 30 June Stadium on Sunday night to go top of the 2019-20 Total CAF Confederation Cup Group A in grand style.

Mohamed Farouk and Eric Traore scored a brace each, while John Antwi and Wilfried Kanon completed the rout for Pyramids, who raised their tally to six points from two matches, same as compatriots Al Masry who defeated Nigeria’s rangers earlier on the day in Alexandria. Pyramids top the group though on goal difference. Rangers and Nouadhibou follow in that order pointless.

It was a one-way traffic from the first whistle till the very end, as the hosts scored twice before the break and then added four goals in the second half to continue their fairytale debut CAF campaign.

It took Pyramids just ten minutes to break the deadlock from Farouk’s brilliant free-kick. It was a second in a row for Farouk who scored in the 3-1 victory over Rangers last weekend.

Burkinabe on form Traore doubled the hosts’ lead at the half-hour mark, heading home from Ragab Bakkar’s cross. Pyramids went to the break 2-0 up.

Six minutes after the recess, Ghanaian Antwi made it three on the night, tapping in easily from Traore’s cross.

Traore was once again behind Pyramids fifth goal, sending a shot that was deflected to find Kanon who scored his first goal for the Egyptians after 75 minutes.

Traore returned to cement his status as Man of the Match, completing the rout with a sixth goal seven minutes from time, making use of a scramble in the Mauritanian defense.

Joint leaders Pyramids and Al Masry lock horns in the coming match day in an All Egyptian derby.