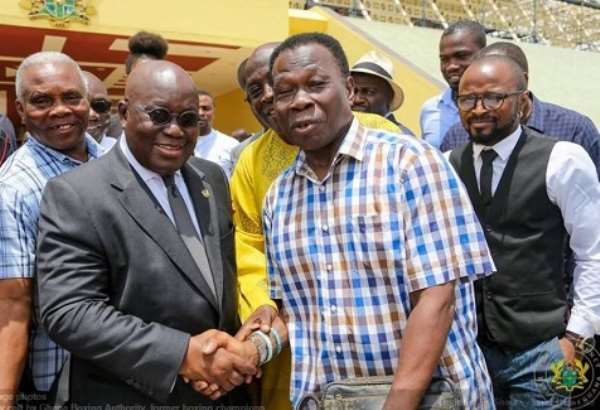 He said he was confident that the assurance by the President to get to the bottom of the issue would ensure a positive outcome and an end to the long-running issue.

Meeting with legends
Last month, President Akufo-Addo granted audience to some of Ghana’s past boxing world champions, including Hall of Famer Azumah Nelson, Ike Quartey and Joseph Agbeko, as well as an international boxing referee, Roger Barnor, at the Jubilee House in Accra.

The visit to the seat of government by a delegation from the boxing fraternity was to present to the President the first copy of ‘Ghana Boxing: Celebration of Our Champions’, a book by celebrated sports journalist, Mr Ekow Asmah.

During his interaction with the boxing legends, President Akufo-Addo was told by an emotional D.K. Poison how in 1976, he loaned to the government of Ignatius Kutu Acheampong an amount of $45,000 out of his purse of $75,000 from his second title defence against Japanese Shig Fukuyama for the purchase of some commodities for the state.

However, 43 years on, all attempts to reclaim the money from the state have proved futile despite promises by past governments to ensure he was reimbursed with the amount owed him.

Sports Ministry
Subsequently, President Akufo-Addo has tasked the Ministry of Youth and Sports to ascertain the veracity of the former world champion’s claim and ensure an amicable solution was found.

In a message to the Daily Graphic, 68-year-old D.K. Poison said he was happy that the President gave him a listening ear, and a promise to ensure the issue was dealt with.

“I trust in your promise and I know that something positive will come out of the intervention,” he said.

On September 20, 1975, D.K. Poison became the first Ghanaian to win a world title when he defeated the champion, Reuben Olivares, by split points in a 15-round clash in Inglewood, California.

He lost the title the following year after a unanimous points defeat to American Danny “Little Red” Lopez at the Accra Sports Stadium.