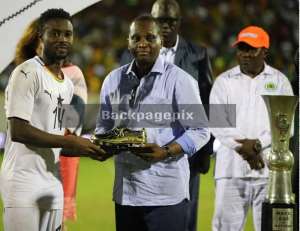 Ghanaian forward, Shafiu Mumuni won the ‘golden boot’ award at the just-ended 2019 WAFU cup of Nations tournament though the Black Stars B missed out on clinching the title.

Ghana who had previously won the last edition went into the final against Senegal on Sunday, October 13, 2019, hoping to emerge victorious to ensure she successfully defends the title.

At the end of a pulsating encounter, however, it was the host nation that was crowned champions after beating the Black Stars B on penalties following a 1-1 draw at the end of 90 minutes plus extra time.

His first goal came in Ghana’s second match against Burkina Faso in the quarter-finals. He later netted a hat-trick in the semi-finals to inspire Coach Maxwell Konadu’s side to a 3-1 win against Cote d’Ivoire in the semis.

He returns home with the golden boot award on top of a good overall performance at the tournament which has reportedly caught the eye of several clubs, both on the continent and in Europe.