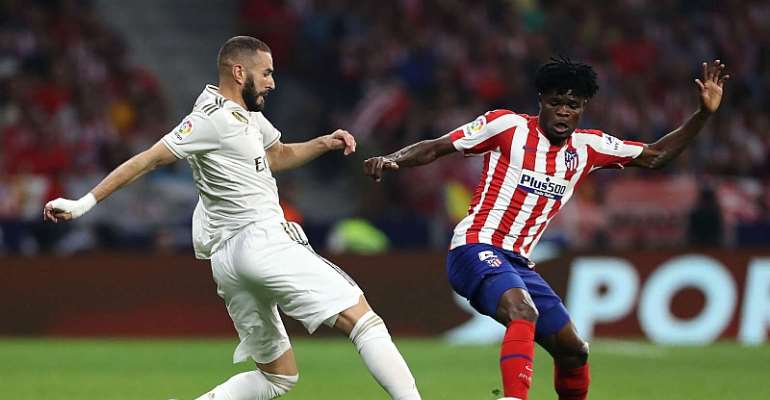 Former Atletico Madrid youth coach Alfredo Santaelena is not surprised by Thomas Partey's displays in Diego Simeone's team this season and has lauded him for his improved form.

Partey has had a fine start to the 2019-20 campaign so far with two goals in his first eight games across all competitions.

The midfielder delivered outstanding performances in his last two outings for Los Rojiblancos, including their Uefa Champions League match against Lokomotiv Moscow on Tuesday.

Partey earned himself the man-of-the-match award during the goalless Madrid derby at Wanda Wanda Metropolitano Stadium last Saturday and also wrapped up Atletico's away win in Moscow with his 58th-minute strike on Wednesday.

Santaelena who once coached the Ghana international during his days in the academy is happy with the Ghana star's progress and identifies him as "the talisman" in the team.

"You could see how good he would become ever since he arrived at the academy," Santaelena told Marca.

"Right now, he's the boss of the team, the Gabi [Fernandez] that played in front of the back four for all those years.

"Cholo went for him quickly because when you see a boy with this quality, who is a wonder physically and who improves tactically and grows, well he was always going to end up among the elite.

"Thomas was very intelligent, he learned quickly, and he was one of the most important players in the academy at the time.

"He had very good technical and physical qualities. He improved a lot on the tactical side [of the game] because that was where he needed to improve the most. But he was impressive.

"And you could also see the mind that he had: with his feet on the ground and things very clearly set out. He had everything [he needed] in order to reach the elite."

Aside from his marshalling display in the midfield, Partey is also getting the goals for Atletico Madrid at critical times and Santaelena is full of praise for his positioning during play.

"Right now, he's the talisman in the [Atletico] team. He's improved so much. Physically he's a wonder, he fills space very well, he's much more organised tactically, he's always well-positioned and he's good on the ball," he added.

"He does a great job and makes Atletico tick. With Koke and Saul [Niguez] alongside him in the centre of midfield, he has a lot of support."