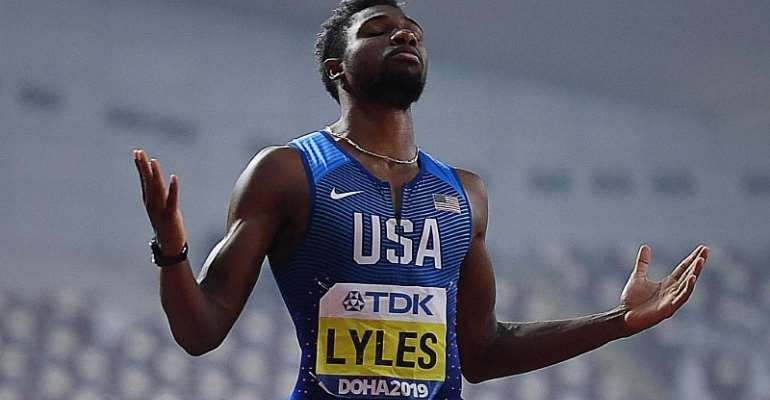 American athletes dominated the fifth day of competition at the world championships in Doha on Tuesday with golds for Noah Lyles, Sam Kendricks and Donavan Brazier.

Lyles, 22, swept to the 200 metres title in 19.83 seconds. Kendricks retained his pole vault crown and Brazier, also 22, became the first man from his country to claim the 800 metres in the 36 year history of the championships.

“The race could have been a little quicker,” said Lyles. “But the first thing in this world championships was grabbing the gold and that goal has been achieved.”

Struggle
“It was my hardest race,” Lyles added. “It has been a full year of running so that taxes your body and it was a case of what I wanted to do and what my body would allow me to do.

“My body was saying it was tired. Over the past few weeks, there have been a few niggles here and there.”

Lyles kept them at bay majestically to win his first world title.

André De Grasse from Canada came in just behind to add silver to his bronze from the 100 metres. Alex Quinonez took the bronze for Ecuador's first medal at the championships.

Nerves
While Lyles' medal was decided within half a minute, compatriot Kendricks battled for more than an hour with Armand Duplantis from Sweden and Poland's Piotr Lisek before emerging triumphant.

Duplantis, 19, took silver and Lisek pocketed the bronze. The troika did a back flip on the pole vault mat to celebrate their achievements. The crowd roared its delight.

“I think it's the responsibility of the champion to build the fraternity,” said Kendricks. “If I don't make this into an environment I would want to be part of, then we can't expect great performances to come out.

"And I can't expect more of myself in the future. Everyone in the stands gets to see a better competition because we like each other.”

Composure
Brazier tasted glory in a championship record time of 1:42.34. He was more than a second ahead of Amel Tuka from Bosnia and Herzegovinia.

“A lot of people had me down to win but I tried not to let that be a load on my back,” Brazier said.

“I just tried to calm myself down. I wasn't calm in 2017 and I think that's the reason why I didn't even make the finals. So to get to the final and to win means the world to me.”

The sole women's final on the fifth day ended dramatically. Kelsey-Lee Barber from Australia stepped up for her final throw of the javelin competition in the bronze medal position.

Her 66.56m effort swept her into the lead. Neither Shiying Liu nor Huihui Lyu, who had occupied the gold and silver medals, could better her mark.

The Chinese duo had to content themselves with silver and bronze respectively.

“You can't expect to win and that's what makes sport exciting,” said Barber. "I'm really happy I achieved a gold. It's more than I was hoping for … but I'll take it.”