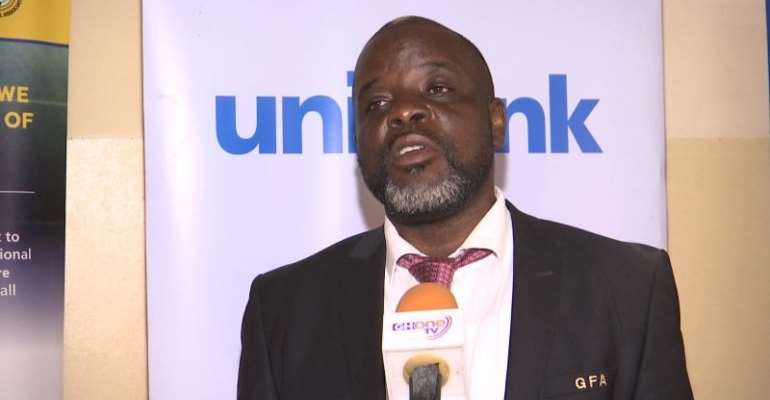 There has been an official denial from campaign team of Ghana FA presidential aspirant Wilfred Osei Kwaku of links with former FA boss Kwesi Nyantakyi.

A widely circulated video on Monday morning shows the ex-FA boss at the palace of the chief of Dormaa, Nana Agyemang Badu. In the video, persons suspected to be palace guards are seen heckling members of Nyantakyi’s entourage and physically restraining them from entry into the premises.

The video has caused ripples in the football sphere because the two persons accompanying Nyantakyi are Takyi Arhin and Kofi Manu, men who have been rumoured to be part of the campaign team of Osei Kwaku, aka Palmer.

“The whole thing makes me laugh. As far as Team Palmer is concerned, this is complete conjecture and a figment of people’s imagination,” Ebo Appiah said, arguing that there is no basis or proof to link his candidate to Mr Nyantakyi’s movements at the palace.

Appiah noted that Palmer was the first candidate to make the trip to the Dormaahene, seeking the chief’s support ahead of the GFA elections, and wondered why this would be necessary.

Joy Sports Track host Gary Al-Smith put it to Appiah that both Arhin and Manu have been known to be sympathetic toward the Palmer campaign.

“Yes, Takyi Arhin is a member of our campaign team, but he has not been unveiled as such,” Appiah said on the show, but denied that Kofi Manu was part of their setup.

Appiah suspected foul play from opposing FA presidential aspirants, and warned that if they wanted to play dirty, Team Palmer is also ready to tow that line.

Nyantakyi remains an influential figure in Ghana football despite the fact that he’s under a FIFA life ban, following the events of last June’s Anas Aremeyaw documentary which effectively killed his career in the game. The general public remains very skeptical of anyone seen to be linked with the former GFA boss, due to perceptions that continue to dog his 13-year stay at the helm.

While at pains to distance all such claims from his candidate, Appiah emphasized that Team Palmer is committed to an issues-based campaign, devoid of what he called “mushroom and gangster behaviour”.

Within the past fortnight, three candidates perceived to be frontrunners in the race to be FA president – Wilfred Osei Kwaku, George Afriyie, and Kurt Okraku – have all been said to have made trips to seek the support of Nana Agyemang Badu.

Why is Dormaahene so important in football?

With control over a large landmass in the Bono and Ahafo territories, the Dormaahene is a powerful figure in affairs around that area, reports JoyNews Bono Region correspondent Precious Semevoh.

The traditional ruler is also a big investor in football, and is also the owner of former Ghana Premier League champions, Aduana Stars.

As it turns out, the Bono and Ahafo regions are a key battleground for all presidential candidates because of the sheer number of football delegates in the area.

There are four Premier League clubs in the area – Aduana Stars, Berekum Chelsea, Bechem United, and Eleven Wonders – with each club having two votes in the coming elections. Also important is the fact that there are up to 10 Division One clubs in the locality, each with voting power.

Add the fact that Regional Football Association delegates usually seek the endorsement of the Dormaahene, and it is clear why every candidate will want Nana Agyemang Badu in their corner.

“George himself made this known last week, so as far as we know Nana Badu’s vote is already gone,” Boadu said on the Joy Sports Track.

Campaigning has started frenetically since it was confirmed last Friday that seven candidates had filed forms to contest the FA presidency.

The elections are slated for October 25.