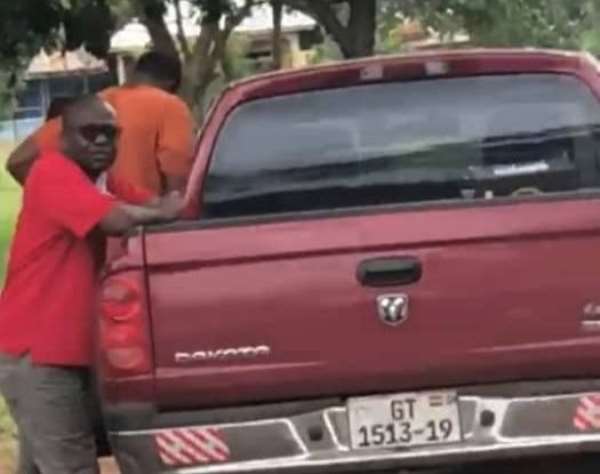 There was near commotion between the guards at the Dormaa Ahenkro chief’s palace and some campaign officers of one of the candidates running to head the Ghana Football Association (GFA).

The scuffle was due to the presence of ex-GFA boss Kwesi Nyantakyi in their entourage.

In a video seen by Joy Sports, the former GFA boss is seen quietly standing by a red pick-up used by the entourage. Meanwhile, one of the campaign officers, Kwaku Manu aka ‘Blue Boy’ engages the guards in a heated argument.

The guards could be heard questioning Mr Nyantakyi’s appearance at the palace to see the chief, Nana Agyemang Badu, over football issues.

They justify their reticence by saying the former FA boss "destroyed Ghana football."

Nana Agyemang Badu is an influential football figure in the Bono and Ahafo areas due to his well-known investment and patronage of grassroots football. He owns the Aduana Stars Football Club.

In the video, the palace guards also invoke the name of investigative journalist Anas Aremeyaw Anas, whose work led to Mr Nyantakyi getting a life ban from football.

All this comes when campaigning for the GFA presidential elections have reached a higher gear, following the conclusion of filing forms last Friday.

The election is scheduled for October 25.