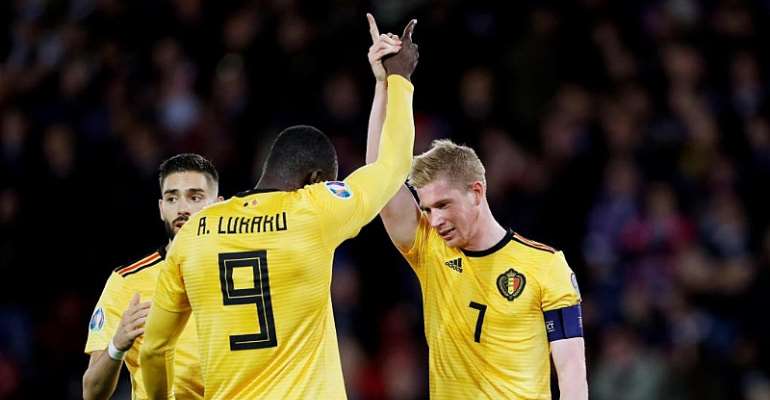 Kevin De Bruyne furnished Hampden Park with a midfield masterclass on Monday night as Belgium pulverized Scotland 4-0 to maintain their 100 percent record in qualifiers for the 2020 European championships.

De Bruyne set up Romelu Lukaku, Thomas Vermaelen and Toby Alderweireld to score inside the first 32 minutes before adding the gloss in Glasgow eight minutes from time.

It was Belgium's sixth win in Group I as they attempt to attempt maintain the momentum that took them to the semi-finals of the 2018 World Cup.

"For me he is the best playmaker in world football," said Belgium boss Roberto Martinez. "Playmakers used to stop the play to make the pass but he can execute that pass on the move."

Recovery
De Bruyne was cut down last season by two knee injuries but the Manchester City midfielder has started the new campaign in fine form.

Martinez said the time spent away from the game would assist both Manchester City and Belgium. "You saw Kevin fresh and full of responsiblity. He's having a very influential role. He has started the season like a man keen to make up for lost time."

By contrast, Scotland boss Steve Clarke conceded his side's hopes of automatic qualification are over after a fourth defeat in six Group I matches.

Challenge
Scotland lie fifth in the pool, behind Cyprus and Kazakhstan. The leading duo of Belgium and Russia are 12 and nine points ahead respectively.

Scotland now have to rely on a play-off next March, earned via winning their Nations League group under former manager Alex McLeish.

"The group is over in terms of qualification," said Clarke. "We have to target third position. There are 12 points up for grabs and we have to make sure we finish third in the group.

"If we finish third, it means we will have performed well and it will give us confidence going into the playoffs in March."