Euro 2020 Qualifying: Everything You Need To Know At The Midway Stage Of Qualifying 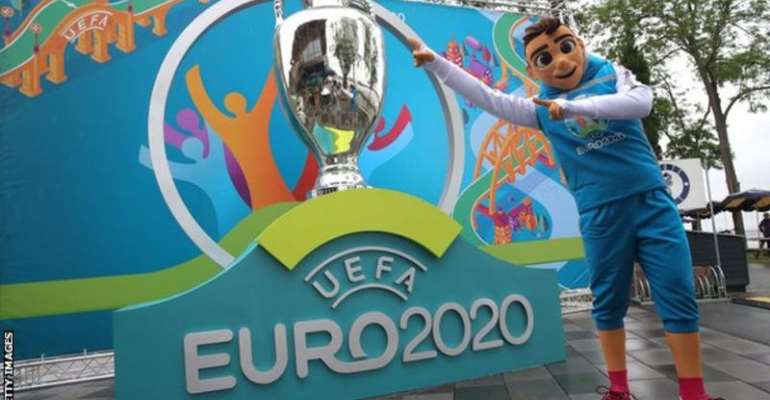 Qualifying for the 2020 European Championship resumes this week with England, Northern Ireland, Scotland and Wales all in action.

How are the home nations doing? Who is favourite to qualify? And what did the Nations League have to do with all of this? Read on to find out more.

How does qualifying work?
There are 10 qualifying groups, of five and six teams, with the top two countries from each group going through automatically. Twenty-four teams in total will play in the finals next summer.

There are no play-offs after these qualifying groups for third place. Instead, the 16 countries who won their respective groups in the Nations League have the safety net of at least a play-off place if they fail to make the top two. England and Scotland are among those teams.

If some of those teams qualify directly for Euro 2020 - which is highly likely - then the next best team in their Nations League tier who do not qualify automatically themselves take their play-off place.

These are the teams guaranteed a play-off place at least.

How are the home nations doing?
Both England and Northern Ireland are top of their respective groups after winning every game so far in qualifying.

England thrashed the Czech Republic and Montenegro 5-0 and 5-1 respectively back in March and have six points from two games in Group A. They are level on points with the second-placed Czech Republic and on Saturday face a Bulgaria side that has yet to win a game so far in qualifying.

Northern Ireland, meanwhile, have played four qualifying games in Group C and won all four. Michael O'Neill's side have claimed home and away wins against Estonia and Belarus but things get considerably tougher from here. On Monday they host Germany before travelling to Rotterdam in October to face the Netherlands. Those fixtures are then reversed in November.

Defeats in Croatia and Hungary mean Wales start the first of five big qualifiers with a home game against Azerbaijan on Friday.

Ryan Giggs' side have won just one of their games in Group E, beating Slovakia 1-0 back in March, and are currently fourth in Group E, three points behind Croatia and Slovakia and six behind group leaders Hungary.

Scotland similarly need a win in their game at home to Russia on Friday to revive their hopes. Steve Clarke's side have six points from four games following wins against San Marino and Cyprus and defeats by Kazakhstan and Belgium.

Scotland are fourth in Group I, three behind Russia and six behind Belgium, who top the group with 12 points.

How are Europe's other leading nations getting on?

World champions France are the favourites to win Euro 2020 and are top of Group H with nine points from four games.

They suffered a shock 2-0 defeat by Turkey in June but they should win their next two games against Albania and Andorra, which are both at home.

Spain are looking strong in Group F. They have won all four of their games so far, scoring 11 goals and conceding four.

Arguably the pick of the games this week is Germany versus the Netherlands on Thursday.

The Dutch will be under huge pressure to qualify for Euro 2020 after failing to make it to the 2018 World Cup. They have one win from two games in Group C so far with Germany beating them in the Netherlands earlier this year.

Meanwhile, Cristiano Ronaldo's Portugal are looking for their first win after two draws from two games in Group B. They travel to Serbia knowing a win will be crucial to their hopes of qualifying.

Italy are firmly in control of Group J after four wins from four. They are away to Armenia on Thursday while 2018 World Cup quarter-finalists Switzerland host the Republic of Ireland in a crucial Group D fixture.

The Republic are top of the standings with 10 points from four games while Switzerland are third with four points.

One man who will be looking forward to the return to action is Israel forward Eran Zahavi. The 32-year-old, who plays in China alongside former Tottenham midfielder Mousa Dembele for Guangzhou, has scored 15 goals for his country, seven of which have come in qualifying in just four games.

The striker has already bagged hat-tricks against Austria and Latvia in Group G - but Israel are still five points behind leaders Poland.

Mahama never paid compliments to Atta Mills like Bawumia do ...
21 minutes ago